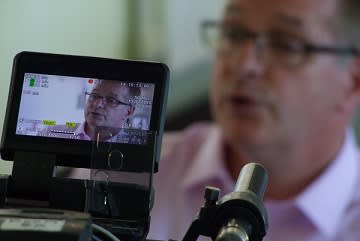 The Minister for Health and Social Care paid tribute to Somerset County Council for its work with Panorama highlighting the pressures on social care.

Secretary of State, Matt Hancock MP, said that Somerset had “done a service to all those who care about social care” by allowing documentary makers to film with its adult social teams, a move he described as “brave and right”.

In a one-to-one meeting with Leader of the Council, Councillor David Fothergill, Mr Hancock discussed the urgent need for a Green Paper and cross-party consensus for long-term approach to sustainably funding social care, as well as a short-term funding fix to ease the pressures Somerset and other local authorities face as the population ages.

Answering a question from Somerset County Councillor Leigh Redman at the Local Government Association’s Councillors Forum, Mr Hancock said: “Somerset County Council allowed Panorama to come and see what was happening and the stresses that social care system is under. That was brave and right, they have done a service to all those who care about social care and I pay tribute to their leadership”.

Pressing the need for a cross-party solution, Mr Hancock added: “This needs a long-term solution…. what is needed here is negotiation, agreement and compromise and that has so far proved difficult.”

The endorsement of the Council’s approach follows the second episode of the documentary film ‘Crisis In Care’ which aired on Wednesday night (5 June), generating a passionate social media discussion about the future of social care.

They document the pressures the system faces and the difficult decisions that come with the growing demand for care from an ageing population at a time of limited funding; as well as and the incredibly moving stories of families and unpaid carers looking after loved ones.

Cllr Fothergill said: “We are enormously grateful to the families who allowed their stories to be told. Incredibly powerful, touching stories that have put social care near the top of the political agenda.”

“It is being talked about in Westminster, there’s been a groundswell of public discussion and the debate about ‘what next’ for social care has been kick-started. That is an achievement in itself, but the harder task is to turn talk and discussion into action”.

Every day around £605,500 is spent on social care in Somerset. Figures recently published by the County Councils Network estimate that by 2024/25 councils will need to be spending an extra £6.1bn every year on Adult Social Care, compared to 2015/16.