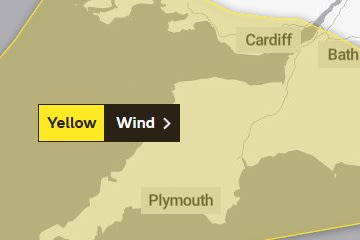 The MET office have issued a yellow weather warning for strong winds for part of tonight and Sunday morning.

A MET office spokesperson commented; “An area of high winds, including gales or severe gales in coastal areas, will reach southwestern England and South Wales during the early hours of Sunday and then spread eastwards, wind over Southeast England then peaking during Sunday morning.”

“The strongest winds will ease later on Sunday morning, but it will remain a blustery day. The highest gusts are expected in coastal areas of southwest England where gusts are likely to peak at 55 to 65 mph. Inland, gusts will not be quite as high and will largely peak at 45 to 55 mph.”

Watch the latest forecast by pressing / clicking play below. (You may need to rotate your device)