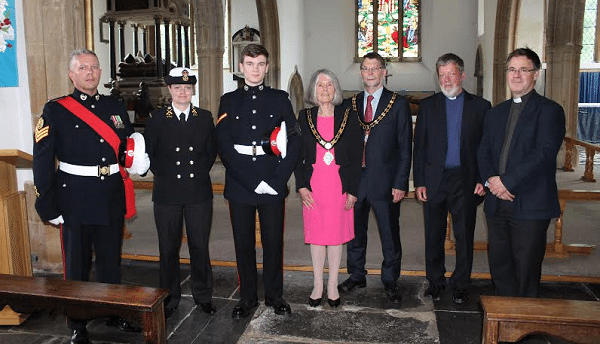 A Civic Service to celebrate the year ahead for the Mayor of Taunton Deane, Cllr Vivienne Stock-Williams, has been held in Wellington.

The service in St John the Baptist Church was led by the Reverend Tim Treanor and the Mayor’s Chaplain Reverend Prebendary Christopher Rowley.

The congregation of 120 people included mayors and chairmen from local authorities across Somerset and beyond, as well as representatives from the emergency services, and local cadet forces.

A number of past Mayors from Taunton Deane Borough Council were also present along with current members including Council Leader, Cllr John Williams, and Deputy Mayor Cllr Hazel Prior–Sankey who gave a reading.

There was also a celebration of the relationships with other local authorities including West Somerset Council and Somerset County Council; and with the local MP; and the twin towns of Lisieux and Konigslutter.

Sixteen-year- old Lance Corporal Paul Bowler of the Taunton Sea Cadets and the Royal Marine Cadets was sworn in as the Mayor’s Cadet to assist Cllr Stock-Williams in her work for the community.

A retiring collection was made for the Mayor’s Charities – the Children’s Hospice South West, Reminiscence Learning and the Somerset National Gardens Scheme, raising £349.

Cllr Stock-Williams said: “I was delighted that so many people were able to celebrate with me. It was a truly memorable day and I am grateful for all the support I received.”