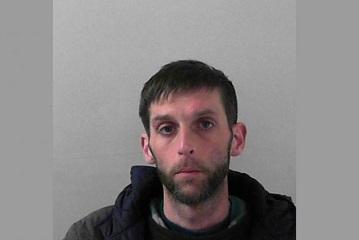 A man from Taunton who stabbed a PCSO with a pair of scissors has been convicted of a number of offences including actual bodily harm, burglary and theft.

Sam Reynolds, 35, of no fixed address in Taunton was sentenced on Friday 6th September at Taunton Crown Court to five years in prison.

Reynolds was charged with three counts of burglary, actual bodily harm, possession of a sharply pointed article, eight counts of theft-related offences, and breach of an existing court order. Reynolds pleaded guilty to all charges and also admitted a number of other offences which were considered during sentencing.

He was arrested on Monday 5th August in which during being detained, he threatened and then stabbed PCSO Sam Bushen with a pair of scissors.

Reynolds appeared at Taunton Magistrates Court on Wednesday 7th August and was remanded in custody until his appearance at Taunton Crown Court.

Chair of Avon and Somerset Police Federation, Inspector Andy Roebuck, said: “Sam displayed tremendous bravery in his actions and is a real credit to the Force, his family and his community. This highlights the dangers that Police Officers and Police Staff endure every day and we should never take their work for granted.”

“We do not come to work to be threatened or assaulted, this is simply not part of our job. We challenge the Courts to acknowledge this work and provide a sentence that is fit for the crime. There has to be a deterrent for such attacks on emergency workers and we need such violence to stop, so that our staff go home safely at the end of their working day.”

Chief Constable, Andy Marsh, said: “The welfare and safety of our officers is paramount and we are continuously investigating new and improved ways of police intervention which will reduce the likelihood of officers being assaulted in the line of duty.”

Police and Crime Commissioner, Sue Mountstevens, said: “Officers put their lives on the line to keep local people safe every day and they do not join the force to be physically or emotionally abused. The bravery and professionalism shown by PCSO Sam Bushen should be commended and I want to thank him for the exceptional bravery he displayed in an incredibly dangerous situation.”

“I hope this sentencing sends a clear message that assaults against our officers are totally unacceptable and we will take whatever action necessary to ensure they are protected and those responsible for such attacks are prosecuted.”