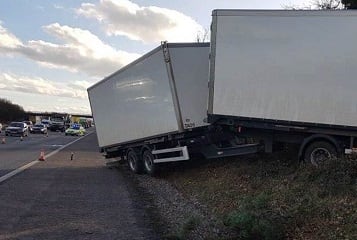 Police have praised the actions of a female lorry driver who saved the life of another and prevented a serious collision on M5. She safely directed an out-of-control vehicle onto the hard shoulder.

Dawn Leonard, 52 is a driver for DHL and was in the middle of a delivery job northbound on the M5 between J25 (Taunton) and J24 (Bridgewater) on Thursday 8 March when she noticed something was wrong ahead of her on the motorway.

The Redditch resident said: “There were lots of cars stopping and I could see a lorry in the outside lane that seemed to be in some difficulty. The vehicle drifted towards the inside lane so I assumed he was going to pull over, when he suddenly began to verge towards the central reservation.

At this point Dawn was unaware that the driver was slipping in and out of consciousness, and struggling to keep control of the vehicle.

“I had to do something to stop him hitting the central reservation or other cars, or else something awful was going to happen. I sped up and began blasting my horn to try to gain the attention of the driver, he was non responsive.

Dawn quickly positioned herself between the central barrier and dazed driver’s HGV, attempting to slow the vehicle down by making contact and as a result was able to move it into the hard shoulder, where it came to a stop by mounting the verge.

“I stopped my vehicle in the hard shoulder as soon as it was safe to do so along with other drivers to check on the driver. Emergency services arrived and quickly took control of situation.”

The driver received no injuries, was taken to hospital and has since been discharged.

Matthew Boiles Roads Policing Officer for Avon & Somerset said: “Dawn knew something wasn’t right and was able to foresee the potentially catastrophic consequences that could have ensued had the truck collided with another road user or the barrier. She demonstrated her professional driving skills and quick thinking to avoid the incident that could have led to serious or fatal consequences for members of the public.”

“You never know how you’re going to react in these kinds of situations and I couldn’t sit without doing anything. Had he hit cars or the barrier it would be anyone’s guess what could’ve happened. I’m just glad the driver is ok and I wish him and family all the best.”