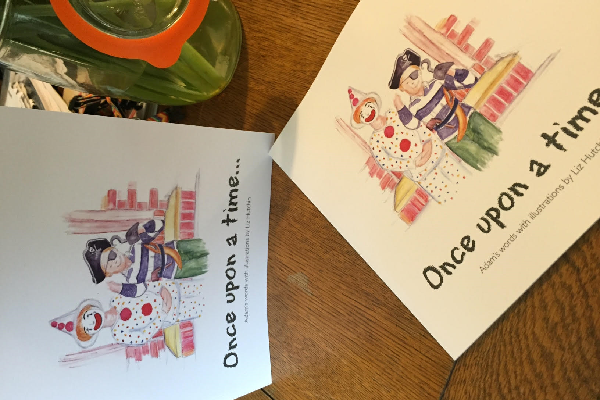 Stand Against Violence has turned Lloyd’s story into book suitable for younger children.

Lloyd Fouracre was murdered in Taunton in 2005 and the hard-hitting film that the charity uses to educate future generations has proven hugely successful.

Because the film is too graphic for primary school children, the charity decided to adapt the story to cover younger age groups. Reaching younger children with the charity’s message provides more chance for positive change.

Adam Fouracre, founder and CEO of Stand Against Violence said: “Working with primary school teacher and freelance artist, Liz Hutchin, we have taken the fundamental elements of Lloyd’s story and created a softer yet equally as powerful story book. Family photos have been lovingly converted into child-friendly illustrations. Liz’s illustrations are wonderful and very true to the original images.’

It began with four or five quick watercolour sketches and Adam’s words in a note-book and slowly evolved. The beautifully produced picture book has emerged with the skill and generosity of Mark Gladstone-Smith at Carly Press in Wellington.

The illustrator, Liz, said: ”’Once upon a time’ was borne out of the need for some visual focus for the primary school children when we were telling Lloyd’s story during star painting workshops for the Constellation project in 2015, which commemorated ten years since his tragic death.

“As an experienced primary teacher, I knew the huge benefits of developing the social and emotional aspects of learning as well as the academic, and when Adam asked me to consider developing some SAV workshops using Lloyd’s story, I was keen to combine all of these elements into a day for Year 6 (10-11 year olds).
“Having agreed to plan these workshops, I needed a suitable resource more than ever, so I set about creating more illustrations to capture elements of ‘ordinary childhood life events’ which would act as a backdrop to the telling Lloyd’s story – SAV’s unique vehicle for their work.

“Creating the extra paintings was an emotional ‘journey’ in itself, with a son of my own in the same school year as Lloyd and personal memories of the family’s connection with Kingston St. Mary Primary School.
“What a sense of personal achievement, but hopefully what an impact on many, many children’s lives as they explore their emotions, the consequences of their actions and the effects of substances like alcohol on their decision-making faculties through these new primary workshops. SAV – aiming to reduce violence through education.”

The books were printed free of charge by Carly Press. Mark Gladstone-Smith, Managing Director of Carly Press said: “Carly Press were delighted to be approached to undertake the print and design of this book. The team were proud to be a part of making such a powerful tool to educate young people on how their actions can impact their local community.