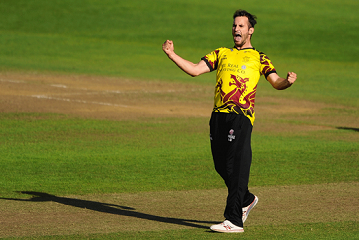 Somerset County Cricket Club can exclusively reveal that Lewis Gregory will captain the side in this season’s T20 Blast.

The 25-year-old led the team in last season’s T20 Blast quarter-final and the Club has taken the decision to award Lewis the captaincy on a permanent basis.

Regarding his appointment Lewis said: “To captain Somerset in the T20 Blast this year will be an absolute honour. To have my name on the Captain’s Board alongside some of the great names in the Club’s history is a huge privilege.

“I had a little taste of captaincy last year and I’m delighted that I’ll get the chance to lead such a talented squad and try to take our T20 game forward. It’s an exciting time for the Club and we have the ability in this squad to beat the best and challenge for silverware.”

Somerset Director of Cricket Andy Hurry said: “Lewis has established himself as a key member of the squad with the bat, the ball and within the dressing room. His journey thus far has demonstrated that he has the potential to evolve in to a great leader. He epitomises how we want to operate, and he is a natural leader within our group.”