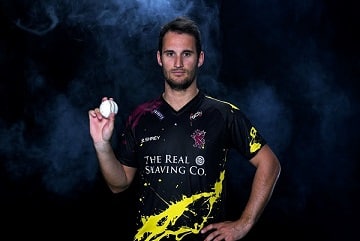 Somerset County Cricket Club are delighted to be able to announce that Vitality Blast Captain, Lewis Gregory has secured his future to the Club with a new three-year contract.

The new deal will see the 26-year-old remain with Somerset until at least the end of the 2021 season.

Lewis joined the County after graduating from the Somerset Academy in 2010 and made his First XI debut against Pakistan in September of that year. Since then he has gone on to become one of Somerset’s most consistent performers across all formats of the game.

A former England Under 19 Captain, Lewis was also called in to the England ODI squad in 2015.

After signing his contract Lewis said: “I’m delighted to have signed a new contract with Somerset and I’m really excited to see what the future holds for us. I needed to take the time to explore other options for personal reasons, but I feel that staying here is what is best for me and my cricket. I feel privileged to be a part of this great club and being made Captain this season is a huge honour.

“There is a real sense of optimism around the changing room, lots of positive change going on and I am exceptionally proud to be a part of it all.”

Somerset CCC Director of Cricket, Andy Hurry said: “We are extremely pleased that Lewis has committed his future to the Club. It’s a great reflection of where the Club is currently that a player of Lewis’s calibre, maturity and professionalism sees his future here.

“Everyone at the Club is looking forward to him playing a key role in what we want to achieve in the next three years and beyond.”