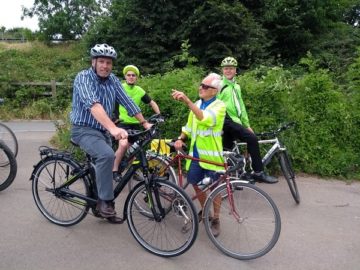 The TACC’ tube map’ is a quality assessment of the cycle network in the Taunton area which highlights the gaps in the network.

A spokesperson commented; “We call our campaign ‘ Turn the Cycle Network blue’  The blue cycle links on the map are quiet and safer for cyclists to use. We want to turn more of the other links on the map blue.”

“On Sat 29th September , we will be publicising our tube map and launching the case for a ‘major scheme bid’ to Government for £10 million capital funds for cycling improvements. We are asking our supporters to turn up to the launch wearing something blue.”

TACC want Somerset County Council and Taunton Deane Borough Council to jointly promote a funding bid for government funding, as a ‘major capital scheme’. This could for example be via the Local Enterprise Partnership.

These funds are needed to carry out much needed improvement to the Cycle Network and to add new cycle routes such as Taunton to Bishops Lydeard and Taunton to Wellington. They hope that an upgraded A358 will be the opportunity to provide a off road segregated Taunton to Ilminster cycle link and they have lobbied Highways England to fund this out of their £100m cycling budget.

Somerset County Council officers are currently developing a Taunton Cycling and Walking Infrastructure Plan as requested by the Government as part of their national cycling strategy and TACC hope in anticipation of future Government funds.

Taunton as a garden town has a 20 year transport plan in development which strongly promotes cycling and aims to double cycling to work from 9% to 18%. In March 2017, TACC  held a meeting  with Councillor Fothergill (then Executive member for Transport at SCC) when Councillor Fothergill agreed that TACC could work with Somerset County Council officers on developing a major capital scheme bid.

Pip Sheard Chair of TACC says ‘ Since TACC was formed two years ago, we have used all the avenues available to us to improve local cycling infrastructure.We have talked to developers, lobbied local Councillors and Highways England and held regular meetings with Council officers.We have concluded that the current mechanisms and funding streams are insufficient to achieve the step change in quality and extension to the cycle network Taunton needs. It is time for local Councils to apply to the Government for a major scheme bid. Investment in cycling and walking will yield large health, transport and environmental benefits.’