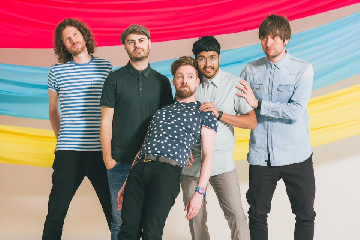 The Brit-award winning band, Kaiser Chiefs are coming to Vivary Park this summer.

Kaiser Chiefs are the second headline artist to be announced as part of Live in Somerset, and will perform outdoors on Sunday 15th July 2018.

The indie rock band, led by lead singer and former The Voice judge Rickie Wilson, first burst onto the world stage following the release of their debut album in 2005. They’ve scored numerous hits including Oh My God, Ruby and Never Miss a Beat. Their sixth record Stay Together was released in 2016 and reached number four in the UK album chart.

The band’s front man Ricky Wilson, said: “We’re very excited to be playing in the heart of Taunton this summer. We’ll put on a great show and will pick out some of our smash hits including Ruby, Oh My God, Coming Home and I Predict a Riot, so come and join us. It will be a great night!”

Claire Kidger, Director of LCC Live, said: “We’re delighted to confirm Kaiser Chiefs to the line-up for Live in Somerset. They always put so much energy into producing a fantastic show, and we can’t wait to see them perform their latest and greatest hits.

“Live in Somerset is shaping up to be an unmissable summer music event.”

Kaiser Chief are the latest artist to be announced, bringing the series of concerts to a close on the Sunday night (15th July). Billy Ocean with special guests Hot Chocolate, The Real Thing, BjornAgain and S Club Party will perform on Saturday 14th July. The artist for the Friday evening (13th July) will be announced shortly.