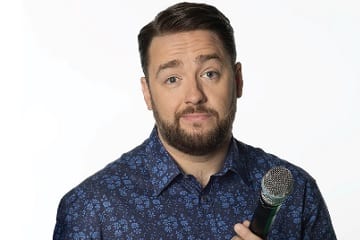 One of the UK’s biggest comedy stars Jason Manford makes his long awaited return to stand-up with his new tour ‘Muddle Class’, featuring 181 dates throughout the whole of 2018 including four huge arena shows.

The comedy star will be at Wellsprings Leisure centre for two nights on Friday 3rd & Saturday 4th August.

Jason took to his social media this week and said; “Today is day 1 of operation ‘Get Taunton gig sold out’! I’ve sold out every gig for the rest of the summer other than Plymouth and Taunton. Now Plymouth I’ve sold out before on this tour so I’m guessing everyone there has seen me. But Taunton. It’s a Friday and Saturday night and the venue only holds just under a 1000! Currently we have 701 seats left to sell and the gig is in just a few days.

Not to blackmail you or anything but I fought to put a smaller venue like this on a weekend because the promoter said ‘ah Taunton, that never sells out’. So don’t lose out, support your local venue and me and my comedy buddies will keep turning up. Otherwise ya gotta keep bloody traveling to see us.

Don’t make me beg (even though I’m already begging!)

‘Muddle Class’ follows Jason’s hugely successful 2013/4 ‘First World Problems’ tour, which ran for 18 months and took him to all corners of the British Isles, performing more than 200 sold out shows.

Jason also added: “I’m sure I must be covering the whole of the UK and Ireland. It’s gonna be a great laugh and I can’t wait to get back to some cracking venues, especially when we see how it flies in some of the country’s best arenas. Come along, bring your pals, your teenagers, your folks and I promise we will have a great night together.”