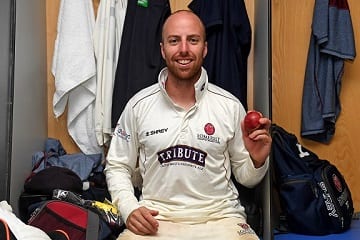 England spinner Jack Leach has given Somerset Members and supporters a New Year boost after signing a contract extension with the County.

Jack, who made a major impact both domestically and internationally last year, has signed a one-year extension which will see him commit his future to Somerset until at least the conclusion of the 2020 season.

After committing his future to Somerset, Jack said: “It’s an honour to represent Somerset, the Club I’ve supported since I was a little boy. I’m living that little boy’s dream every time I put on the shirt and play in front of the Somerset supporters.

“I’m very proud to have signed a new contract with my home county.”

Following the announcement Head Coach, Jason Kerr said: “It’s great news for all connected to the Club that Jack has extended his current contract.

“Personally, I’m delighted that Jack has committed his future to the Club. He continues to contribute with match-winning performances and behaviourally epitomises everything we are trying to achieve at the Club.”

Born and raised in Taunton, Jack’s first experience of Somerset County Cricket Club was when he was brought to the ground as a spectator when he was just a few days old.

After successfully progressing through the Somerset age group pathway, Jack made his Somerset debut in 2012 against South Africa. During the match he claimed his first scalp; that of Hashim Amla.

2018 saw Jack claim career best figures of eight for 85 against Essex as Somerset finished second in the Specsavers County Championship. Indeed, last season was an outstanding campaign for the 27-year-old who took 30 Championship wickets at an average of 24.07.

His performances for Somerset were rewarded with a call up to the England squad for their tour of Sri Lanka where he carried his domestic form in to the international arena, finishing the series with 18 wickets.