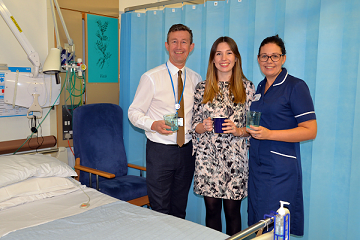 The Droplet trial involves a dementia-friendly mug and plastic tumbler that play a series of pre-set messages to patients if they are not drinking regularly enough. They can be programmed to include personalised messages from patients’ families, and they help ward staff to see if their patients are drinking enough.

Musgrove is the first hospital in the world to use Droplet, and it was launched this month on the Conservators, Exmoor, Gould and Sheppard wards. Early indications show that patients who used the Droplet mug and tumbler drank 40 per cent more liquid than those who did not use them.

It is hoped that the trial will eventually be extended across the rest of the hospital.

Droplet was developed by university student Ellie Van Leeuwen, as part of her product design course at Bournemouth University. She was inspired to create a solution following the care of her grandmother, who she said became disorientated and confused while in a hospital elsewhere in England after she
became diagnosed with dehydration.

Ellie felt there must be a better way for patients to be prompted to keep drinking fluids on the ward.
She said: “It’s very exciting to get this opportunity to trial the work I have done over the
past three years in a real life hospital setting.

“Last week I spent time on the wards and it has been great to see patients’ reaction to the mug and tumbler and how it’s making a difference to them.”

The idea was taken on by an international product manufacturing company and had input from a wide range of health and social care professionals.

The mug has a broad stable base and a chunky open ended handle to allow patients with weak or swollen hands to easily grip the handle or the body of the mug with one or both hands.

It insulates the heat of the drink, which means patients can hold the mug without burning their hands and there are measuring lines to record fluid levels. The mug is also scratch, shatter, odour and stain resistant.

The tumbler is very similar in the way it works, but it is tinted blue, giving the impression of fresher, cleaner and colder water, making it look more appealing to drink from.

But the star of Droplet is the light and sound reminder base which can be attached to the mug or tumbler.

Kerry Trunks, sister on Conservator ward, where Droplet has been trialled, said: “It’s been great to trial the new mugs and glasses on the ward to encourage patients to drink more.

“Their appearance is much more appealing, especially for patients who have brain injuries or cognitive impairment. Feedback so far is overwhelmingly positive.”