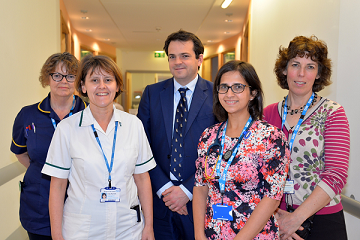 Older people who need general surgery at Musgrove Park Hospital are now getting assessed for their wider health and wellbeing, as well as their surgical needs.

Specialist geriatricians are now working alongside surgeons to look at older people’s medical, psychological and functional capability, by developing a treatment plan and long term follow-up care tailored to each individual patient.

Clinicians involved in the service, called Proactive Care of Older Adults Undergoing Surgery (also known as POPS), have already reported a number of significant improvements in the care of patients.

They were also able to spot previously undiagnosed syndromes and medical problems through their additional assessments and reviews. This has improved the quality of care and meant patients could be treated more quickly.

Figures show that patients involved in the study were able to go home on average half a day earlier than before, which helped to reduce the risk of some complications associated with a longer hospital stay.

And in total during the first 12 months of the study almost 600 beds were freed up for other patients to use.
The project began in November 2016 and focused on patients who had colorectal or upper gastro-intestinal surgery. The study was overseen by multidisciplinary team of clinicians across Musgrove.

Dr Nahida Bashir, care of the elderly consultant at Musgrove Park Hospital, said: “This service has shown that where geriatricians and surgeons work together, we can improve the care of older surgical patients who are in hospital.”