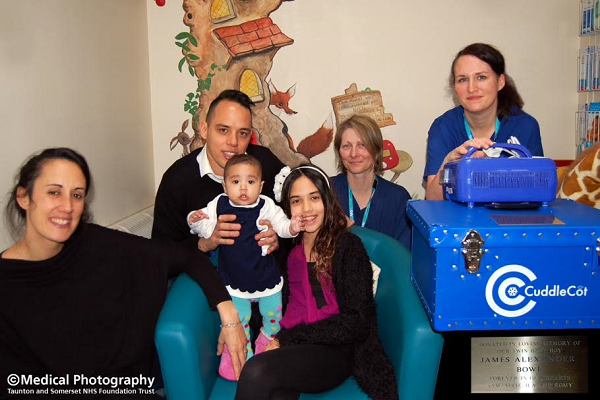 An Ilfracombe couple have raised £3,000 to buy a cuddle cot for Musgrove Park Hospital so parents who experience a stillbirth can spend precious time with their baby.

Allie and Sam Scott chose to raise the money following the stillbirth of their twin baby boy, James. His sister, Romy, was delivered at 38 weeks, but James sadly died at 32 weeks from a rare genetic condition.

“We used a cuddle cot to be able to see James before his funeral in the safe confines of our private hospital room in North Devon,” said Allie.

“This meant we could spend precious moments with him to try to come to terms with what had happened.

“We felt people didn’t know how to express their sadness about James and hoped that by setting up a fundraising effort this would allow people to mark James’ life in a positive way.

“We wanted to donate the cuddle cot to Musgrove Park Hospital as we were told by the stillbirth and neonatal death (SANDS) charity that the hospital was looking for one.

“The cuddle cot bears James’ name and we feel proud that as a family we are able to help others who face such a sad situation. It also helped us to feel that James’ short life was meaningful and that his name would live on.”

A cuddle cot has a cooling system designed to keep a baby’s body cool after death and slow down natural changes in the baby. It helps to give parents an opportunity to create memories.

Angela Barker, a bereavement nurse at the Somerset neonatal intensive care unit (SNICU) said the kind donation will help to provide some comfort to parents who have a stillborn baby.

“I want to give my sincere thanks to Allie and Sam for this amazingly generous donation following the sad death of their baby James.

“We are very touched that they chose to make the donation to us and we know the cuddle cot will help other families to spend that little bit of extra precious time with their babies to create memories.”