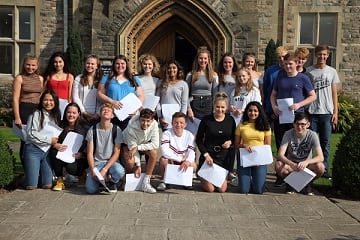 Fears about the impact of the tougher new grading system of 9-1 proved unfounded at Taunton School as 20% of all entries across 30 subjects resulted in the very top grade (9 or A*).

87% of students gained at least five 9-4 grades (A*-C equivalent) including Maths and English. The overall pass rate was 90%, considerably higher than the national average. Art, Science, Latin and Music performed particularly well on the new number grade system, as did MFL and PE on the old ‘letter’ grades.

Top achiever Daniel Lloyd-Jones, who joined Taunton School in Pre-Prep, achieved an amazing 4 A*s, six 9s and one 8. Daniel, from Taunton, said: “I’m really happy with my results. I wasn’t sure about the new marking system and what effect it would have so I am really pleased. All the teachers have been excellent.” Daniel will be studying Physics, Latin, Maths and Further Maths A Levels at Taunton School and hopes to study Physics at university.

Jack Kerslake achieved an outstanding 5A*s, 1 A and five 9s. Jack, from Kingston St Mary who joined Taunton School in Year 7, said: “I am really happy. I was feeling nervous this morning so to see my results and that I got a 9 in Physics, which I never thought that I would, is good. The small class sizes have given me the support that I needed.” Jack has chosen to study the IB at Sixth Form at Taunton School because he wants to continue with a wide range of subjects

With aims to become a doctor, Alice Searle, from Puriton, achieved an excellent 2A*s, 1A, 1B,  four 9s and one 8. Alice said: “I am really surprised how many 9s I got. I wasn’t too sure where I was going to sit in the new grading system so I am happy with these results. I am going to do the IB next at Taunton School as I want to go into medicine and I think studying a wide range of subjects will help as I can continue a language and other subjects with the sciences. I’ve wanted to be a doctor since I was about 8, I like the idea of helping people and having new things to deal with every day.” Alice, who has been involved in school drama productions, choirs, hockey and netball, praised the support of the teachers at Taunton School.

Anna Beaven was shocked and delighted with her results when they turned out to be much better than she had expected. Anna, from Roadwater, who joined Taunton School in Year 9, achieved 2A*s, 2As, four 9s and one 8 and gained the highest grade of two 9s for combined science on record at Taunton School. Anna said: “This is unreal. I was expecting B’s and I didn’t think I would pass a few of them. I got my friend to open the envelope for me. I thought the results weren’t mine at first.” She is progressing on to do Spanish, Psychology and English Literature A Levels.

George Tester, who joined Taunton School in the nursery, achieved 3A*s, 1 A, 1 B, 1 C, two 9s and two 8s. George, from Taunton, who is the U17 Somerset and South West 400m Champion, said he was grateful for the persistence of the teachers: “They never stopped encouraging me and I must have been frustrating at times. I feel that my results show that any effort, at any point, doesn’t go unmissed. I have some really good grades and surprisingly a B in French.”

Destined for a career in medicine, Nivi Gurushankar, from Taunton, achieved 3A* 2A, three 9s and one 8. The netball and hockey player, who joined Taunton School in Year 7 from Parkfield Primary School, said: “I am so happy. I am going on to study A Levels in Biology, Chemistry and English. My parents are both doctors so I am inspired by them and I love Biology. I think the small classes and the teachers have really helped me. I’ll be celebrating with family today.”

Finn Hallworth, from Lydeard St Lawrence, gained 3A*s, 1A, 1B, four 9s and one 8. Finn, who joined Taunton School in reception and has played first team rugby and is on the clay pigeon shooting team, said: “I am pleased as my results allow me to do what I want to next which is four A Levels in Economics, Maths, Chemistry and Biology. I was feeling nervous and was ready to be disappointed but I wasn’t. The support that teachers gave me during revision time really helped me.”

Lee Glaser, Headmaster of Taunton School, said: “I am delighted with these results and so proud of our students. They have taken the uncertainty surrounding gradings and new courses in their stride and delivered an excellent set of results. The teachers have provided outstanding support and always go the extra mile.”