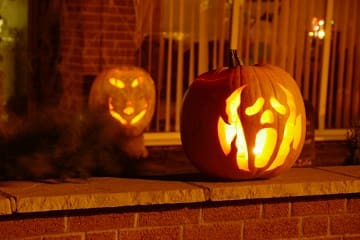 Halloween’s scariest thing is its wicked waste, from the deadly damage it can do to a bank balance to its fearful impact on the environment.

Youngsters are being urged to get families to gorge on flesh – the pumpkin kind – and tear apart anything old, such as clothes to make costumes that can later be recycled or reused.

Halloween can be a chillingly costly time of single-use plastic outfits and processed foods with enough e-numbers for a zombie apocalypse, according to Somerset Waste Partnership (SWP).

Buying too much, poor storage and big portions means costly food waste, while every creepy costume put in a rubbish bin and sent off to £100-a-tonne landfill adds to council taxes.

But 31 October can just as easily be a chance for family fun making horribly healthy treats, including tasty toasted pumpkin seeds, and creating unique costumes.

A SWP spokesperson said: “All it takes is a little planning, a quick check for trick-or-treat recipes online – lovefoodhatewaste.com is great – and letting young imaginations run wild.

“Fewer of us today regard waste as a sin, but it is fearful how much rubbish we create, especially around spooky or special occasions like Halloween, Guy Fawkes Night and Christmas.”

Getting serious about something scary, SWP is also warning families to be sure that they do not start a potentially fatal fire in their rubbish bin after bonfire night with ashes or fireworks.

The advice on ash, embers, barbecues and even the contents of ashtrays is to ensure they are completely cool or drenched with water to avoid fire risks in bins, vehicles or on landfill sites.

Fully spent fireworks must be soaked in water and then they can be disposed of in general refuse or taken to a recycling site to be put in the general waste.

Misfired or partly spent fireworks must be soaked in a container of water overnight, until properly sodden, and the manufacturer or supplier should be contacted for guidance on disposal.