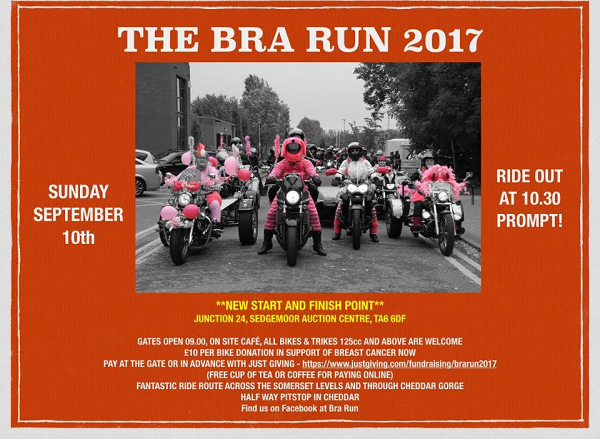 The Bra Run was started in 2006 by Bridgwater bike rider Dave Ellis, who had lost a close friend to
cancer and wanted to do something to help raise funds for cancer research.

Little did Dave know that from his first run, which attracted just a handful of bikers, the event would quickly become a major draw for bikers from all over the South West and beyond.

Over 100 bikes took part in last year’s Bra Run and more than £2500 was raised on the day for the nominated charity, Breast Cancer Now.

The 60-mile Bra Run route starts from Bridgwater and takes the riders out across the Somerset Levels
through Street, on to Glastonbury and then on scenic lanes through Wedmore and into Cheddar, where
the Kings Fitness & Leisure Centre provides a welcome pit-stop.

After taking on a quick cuppa at the Lattetude Café the bikers take on the twists and turns of Cheddar Gorge before returning to Bridgwater via Burrington and Churchill.

Mike Batchelor, the organiser of this year’s Bra Run said “We’re really pleased to have a new start and
finish venue for this year. The management at Junction 24 have generously allowed us to use their
parking area and café, so we’ll have plenty of room for everybody who wants to join this year’s Run and a great breakfast to start the day.

There’s really easy access to Junction 24 from the M5 motorway or the A38. We’ve added a little bit more to the usual Bra Run route, too, as we set out from Junction 24 though North Petherton and on to the A361 to pick up last year’s route at Greylake”.

Riders who take part in the Bra Run make a £10 per bike donation in support of Breast Cancer Now.
They can choose to pay on the day at the gate but if they make their donation in advance through the
Bra Run’s Just Giving page (www.justgiving.com/fundraising/brarun2017) they’ll get a free cup of tea or
coffee at the Lattetude Café pitstop.

Mike Batchelor said “We’d like to encourage riders to make their donation online, not just because they’ll get a free cuppa but also because they can choose to increase the value of their donations by 25% by selecting the Gift Aid option”.