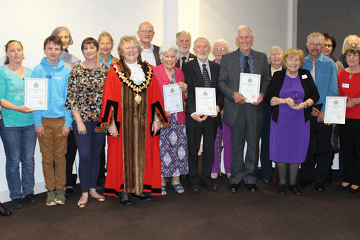 The unsung heroes of Taunton Deane were celebrated at a recent Citizenship Awards ceremony hosted by the Council in conjunction with local Rotary Clubs.

The event honoured individuals and voluntary groups nominated for making a difference to people living in our community. Everyone who received a nomination was invited to attend and collect a certificate.

The winners – Clement Pryer, Conquest Centre Volunteers, Friends of Wellington Park, Mike Newbury and Vera Cottey-Williams – also received a glass trophy and a donation of £100 for a charity of their choice. The awards were presented by The Mayor of Taunton Deane Cllr Hazel Prior-Sankey.