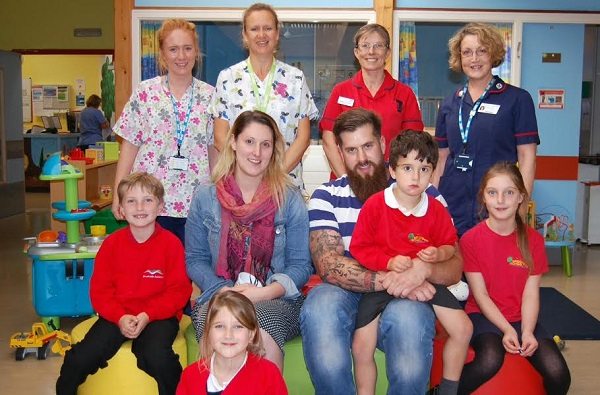 Sam Palmer, from Glastonbury, has completed a gruelling climb of the three highest peaks in England, Scotland and Wales in 24 hours, to raise over £2,000 for Musgrove Park Hospital’s children’s ward.

In March 2015 Sam’s two year old son Ollie was at home playing with his sister when all of a sudden he experienced a generalised clonic tonic seizure and was rushed to Musgrove Park Hospital’s emergency department, where he was referred on to the children’s ward.

Ollie was diagnosed with a virus in the lining of his brain, which caused extreme pressure, resulting in multiple seizures. Ollie’s parents spent a total of 10 days between Acorn and Oak ward at Musgrove and had access to various facilities to pass the time while they were waiting for answers. He said: “It was evident that the ward was under pressure, but staff still found the extra time to calm Ollie during his confused and aggressive episodes.”

Ollie is now three years old and is due to start school in September, due to the ongoing support and care given to him from both the paediatrician and his personal epilepsy nurse. He is on plan to catch up on his development and will be closely monitored and given access to a sensory room.

Sam added: I am so happy to have been able to raise this money for the children’s ward at Musgrove to help them in the constant battle to keep children well and entertained during treatment.”

Musgrove’s fundraising is coordinated through the hospital’s official charity, called Love Musgrove, which buys those extras to improve patient care and experience that are not normally funded by the NHS.

If Musgrove Park Hospital is close to your heart and you’d like to raise money for it, email fundraising@tst.nhs.uk or call 01823 344 437 for an information pack.