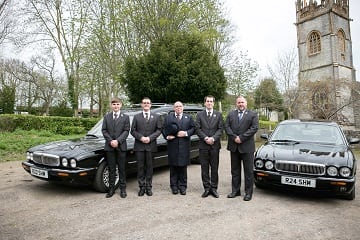 Simon Helliar-Moore of Crescent Funeral Services in Taunton is proud to introduce their newest member of the team, James Chorley, as a Trainee Funeral Assistant.

James recently completed his GCSE Exams at Heathfield School and on July 9th started in a Full-Time training position with the Funeral Directors and is following in the footsteps of his late Father, Adam who was a much-loved
Funeral Director in Taunton.

At 16, James joins a team of Funeral Directors who begun their careers in the Funeral profession at the same age, straight from school.

Simon said, “Both myself and Jason started at the same age as James and all know It is not an easy world to become part of when you are so young. I recognised the passion that James has, it is the same passion I had at his age for the profession and providing the best of care to a bereaved family. We should all be encouraging the younger generation to consider entering the profession as they are the future of Funeral Directing – for me personally it has given a lifetime of knowledge and understanding.”

As well as inspiring and helping the new generation of Funeral Directors, Crescent Funeral Services are still coming down to earth after a fantastic night at the Taunton Deane Business Awards, where they made Finalists in the categories for Customer Excellence and Marketing.

It is unusual for Funeral Directors to be so present in the community but, Simon and the team were commended by the Judges for their unique and sensitive use of Social Media and Radio and for providing wonderful customer support.

One Judge unknowing came up with a pun during their speech, by saying that “Crescent Funeral Services are thinking outside of the Box”, words that raised more than a few smiles.

The Crescent Team were also commended for their campaign to combat Funeral Poverty by being very open and transparent about their services, whilst offering them at a very fair price. Crescent Funeral Services work tirelessly to ensure they are paving the way to amore open Funeral experience for the bereaved people of Taunton and
surrounding areas and are proud to be providing friendly and honest services to the community from an independent Funeral Directors that truly cares.