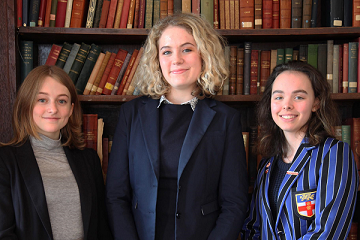 Two scientists have earned Oxbridge offers: Annabel Flook for Chemistry at Exeter College, Oxford, and Tia Hawkins for Natural Sciences at Newnham College, Cambridge. Meanwhile, Kieran Bailey, who left in the summer and is currently on a gap year, has been offered an unconditional place to read History at Christ Church, Oxford, while fellow historian, Abbie Casson, has an offer from Lady Margaret Hall, Oxford.

Abigail, Annabel and Tia were all awarded major academic scholarships at Taunton School.

Annabel Flook, who currently lives in Taunton, said: “I enjoyed the interview process at Oxford. I felt that I got on naturally with everyone there and that made me really want to succeed. I am so happy that I’ve been offered a place to read Chemistry at Exeter College, Oxford.” Annabel, who joined Taunton School in Year 5 is studying A Levels in Chemistry, Maths and Latin and carried out an Extended Project Qualification (EPQ) with the complex title “Is there a better visual representation of the elements than the Mendeleev Periodic Table”. She added: “I’m not sure what I will do when I have my degree, but I’d potentially like to join the MoD Police”. Annabel has had experience of the military already, as she has just finished her year-long role of Somerset Lord Lieutenant’s Cadet; a rank which is a national honour and a recognition of the high level of commitment, leadership and ability that all cadets are encouraged to emulate.

Tia Hawkins, who lives in Dulverton, has been offered a place to read Natural Sciences (Biological) at Newnham College, Cambridge – a place she is familiar with. “I used to live near Cambridge and visited often last year so I’m really looking forward to going back to a place that is so beautiful. I’m really excited to have received the offer and I can’t wait to start pursuing a career in Biochemistry.” Tia started at Taunton School in Year 7 and is currently undertaking A Levels in Maths, Biology, Chemistry and Latin. Tia’s EPQ was an in-depth look at cancer treatment: ‘Compare a PAK4 inhibitor to combination therapy in the treatment of triple negative breast cancer’.

Abigail Casson started at Taunton School in Year 9 and travels to school from her home in Nether Stowey each day. She has received an offer from Lady Margaret Hall, Oxford, to study History. Abigail said “The interview at Oxford was a mixed experience; I had two really good interviews and two I wasn’t so sure about. It’s very self-affirming to be recognised for what you feel passionate about”. She said that her teacher at Taunton School encouraged her to apply, something she didn’t think would be conceivable. “I realised what a great opportunity it would be to go to Oxford and I’m so glad I applied. I cried after my interview!” She added: “I am taking A Levels in Early History, Classical Civilisation and Drama and my intention is to become a history documentary presenter in the future. I love acting as well as history, and my inspiration is the scholar and classicist Mary Beard.”

Kieran Bailey, who finished at Taunton School in the summer and was the school’s highest achiever in 2017 gaining 4 A*s and an A at A Level, has been offered a place to read History at Christ Church, Oxford. Kieran is currently on a gap year working as a boarding, debating and English tutor at Aitchison College in Pakistan, before going travelling across America, Italy, Jerusalem and some other places from mid-March onwards. Kieran said “I am tremendously excited after being accepted to study at Oxford and hugely grateful to Taunton School for the progress which it helped me to achieve, particularly in imbuing me with the power of positive thinking, big thinking and a winning temperament of never quitting.” He added: “The History Department and others gave me incredible support in all areas and I can now enjoy my gap year looking forward thrilled and exhilarated for October.” When at home Kieran lives in the Bristol area.

Every year the competition for places at these leading universities intensifies. Oxford, for instance, saw a record number of applications this year (more than 22,000 for just over 3000 places) and interviewed under half of all applicants.

Nine candidates from Taunton School reached the interview stage this time around, itself a considerable achievement, and four offers is in keeping with the school average over the past twenty years.

Headmaster Lee Glaser commented: “Taunton School is non selective and I am proud of all of our students as they aim to achieve their full potential. I am delighted that many of our students have received offers to attend excellent Universities. Annabel, Tia, Kieran and Abigail have worked hard and have been rewarded with offers to attend two of the best universities in the world. They have an exciting future ahead of them”

Students are supported by Taunton School staff throughout the rigorously competitive process of application, entrance tests and interviews.