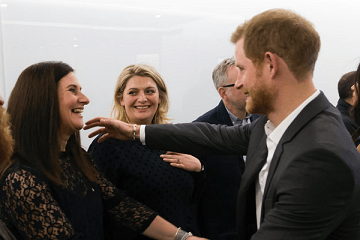 A former Queen’s College teacher, who suffered a double tragedy six years ago, is to receive a special award next month.

As a result, Rhian set up “2 Wish Upon a Star” to provide family rooms at hospitals, bereavement counselling and bereavement boxes for parents who have lost a child.

Rhian met Prince William, Prince Harry and the Duchess of Cambridge last year when she ran the London Marathon in support of their Heads Together mental health campaign to encourage people to speak out about their psychological problems.

Now, in recognition of her efforts, she has had been named among the first winners of a Spirit of London award in association with the race, which takes place this Sunday, 22nd April.

Rhian said: “Paul was studying in London when we met and I had never been there until then.

“I have such happy memories of those times and, it sounds silly, but for years afterwards I couldn’t even see a sign for London without anxiety.

“To run the marathon thinking of him and George all the way was amazing and I feel so humbled to be named one of the first winners of the new Spirit of London award.”

Rhian was recently invited to the Royal Foundation Forum attended by the three royals along with Prince Harry’s fiancee, Meghan Markle.

She was asked to be on a panel to discuss the Heads Together campaign and mental health and said afterwards: “The young royals have supported me on my journey and have helped me get my life back on track, becoming once again the mummy I always planned to be.”

Rhian will be presented with a special commemorative Spirit of London coin at an awards ceremony in May.