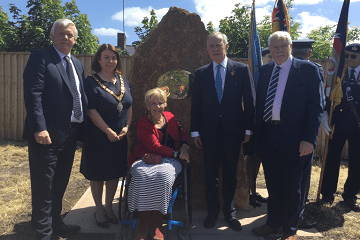 A stunning flypast by an RAF A400 Atlas was the finale of celebrations in Taunton yesterday, June 14th, to mark the 100th anniversary of the Royal Air Force and honour one the town’s most illustrious sons.

Somerset County Council welcomed special guests including the 3rd Viscount Trenchard, senior serving and retired members of the RAF, and local dignitaries to pay tribute to Hugh Montague Trenchard, the Taunton-born man regarded as the founder of the RAF.

Lord Trenchard unveiled a permanent memorial to his grandfather and also formally renamed the Northern Inner Distributor Road as Trenchard Way before the flypast brought proceedings to a close.

Cadets from 41F (Taunton & District) Squadron Devon and Somerset Wing ATC marched to the ceremony watched by a crowd of local people including representatives of the local Armed Forces community.

In a speech, Councillor David Fothergill, Leader of Somerset County Council, said: “This finally recognises one of our greatest sons and says we’re very proud of the original Lord Trenchard who did so much for our country. We’re delighted to finally put the Trenchard name on the map for Taunton.”

He closed: “Thank you all for coming along. I think a wrong has been righted today we’ve finally recognised Lord Trenchard, who was a great son of Taunton and of whom we should be very proud. We now have a permanent remembrance of him.”

Lord Trenchard also gave a speech of thanks before cutting the tape to unveil the memorial. He said: “I’m most honoured to have been asked to formally open Trenchard Way today. I think it sounds much better than NIDR so let’s hope the name catches on.”

Hugh Montague Trenchard, the 1st Viscount Trenchard, is widely regarded as the Father of the RAF after being appointed the first Chief of the Air Staff when the RAF was formed in 1918. He was born at Haines Hill in Taunton in 1873 and spent his childhood at Courtlands in Norton Fitzwarren before going on to serve a distinguished military career.