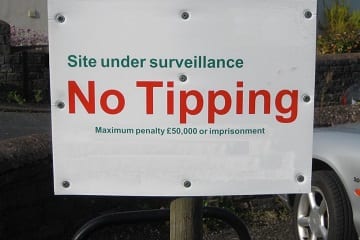 A Somerset man who fly-tipped waste over his garden fence into a back lane spent a night in jail for not dealing with a fine for the crime and left court on Tues 3rd Oct with a bill for £280.

Unemployed father-of- two Marcus Jones, aged 25, was arrested and held overnight after he failed to appear for a summons about an unpaid fixed penalty notice for dumping rubbish.

Responding to questions from a council enforcement officer, Jones admitted fly-tipping, said he was not aware that his conduct was an offence and apologised.

But he never paid the fixed penalty notice, which is reduced from £400 to £250 if settled early, saying that he could not afford to meet the cost.

Today Jones, from Dukes Mead in Bridgwater, was fined £250 for fly-tipping, with a £30 victim surcharge but the court was told he would not have to pay costs because of his low income.

He added that, under the Environmental Protection Act 1990, householders have a legal “duty of care with regard to their waste and a duty to ensure that such waste is properly disposed of”.

Fixed penalty notices and court prosecutions are part of a Somerset-wide campaign to fight fly-tipping that has included closing a road that became a dumping blackspot in Mendip.

With special training and coordination efforts, surveillance cameras and warning signs, Somerset’s councils have seen fly-tipping across the county fall to a five-year low.

And there are hopes that a new push can be launched to tackle “Facebook fly-tips” with online warnings about criminal dumpers for those using social media to get waste taken away.

Simple steps anyone can take to fight fly-tipping are highlighted on Somerset WastePartnership’s website at somersetwaste.gov.uk/about/fight-fly- tipping.