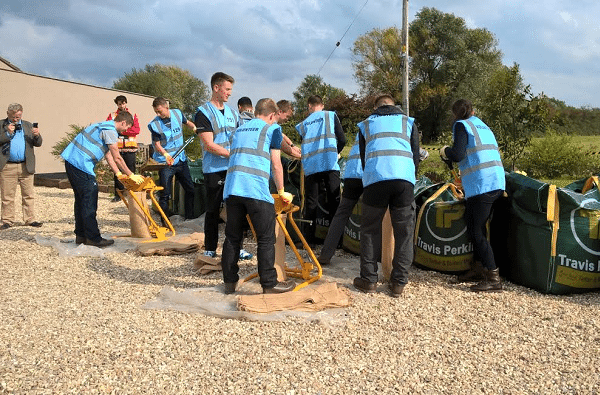 Somerset’s ground-breaking emergency spontaneous volunteers exercise has been hailed a success by all involved.

Somerset County Council and its partners coordinated the exercise that took place earlier this month, which involved over 100 people (acting as spontaneous volunteers) responding to a ‘fictional’ flooding incident.

The first of its kind in the country, the exercise saw volunteers register at a volunteer response centre before been given key tasks to complete, including delivering information to local households and practicing the filling of sandbags.

Deputy Leader of the Council and Cabinet Member responsible for emergency planning, Cllr David Hall, said: “The purpose of the exercise was to practise the coordination of spontaneous volunteers who may wish to help during an emergency situation.

“During the flooding in 2014 we had lots of willing people from all over the country travel to Somerset to help with the response. Following the incident we recognised that the coordination of these volunteers could be improved and we developed guidance. The exercise was a chance to test the guidance and make sure that the volunteers were coordinated safely and to their full potential.
“I am thrilled that the exercise was a success. We will now evaluate all of the activity and make improvements to our guidance based on our learning from the day.”

Rhona Light, local Flood Warden in Moorland, said: “It was great as a local villager and flood warden to see how volunteers can be safely and effectively organised by local partner organisations, and with the support of international emergency response organisations Team Rubicon and Serve On. It gives me confidence that if there ever was an emergency situation in the future that the great volunteers who helped last time would be given professional support so they can get on with the job.”

Representatives from the Cabinet Office, Department for Communities and Local Government (DCLG) and the Department for Environment, Food and Rural Affairs (DEFRA) attended the exercise to learn from the Somerset experience. The exercise alongside the visit by officials to Moorland will help to confirm the national guide.

All of the sand and other materials used during the exercise are being stored locally and will be available to use in the event of a real flooding emergency.