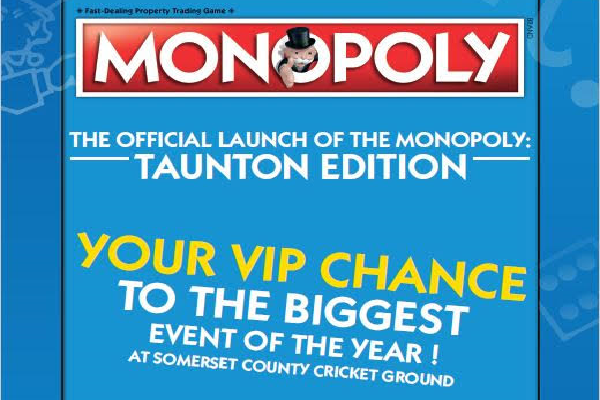 The MONOPOLY game for Taunton is being launched in VIP style on 19th October with a RED carpet being rolled out at The Cooper Associates Somerset County Cricket Club, it is announced this morning.

And one Taunton person is getting the ‘Chance’ to receive the very first game to roll off the presses it is also announced today.

The makers of the new board, WINNINGS MOVES UK, are searching for a VIP – Very Important Player as well as Person – to be a very big star for the day when the game is launched in the town.

This lucky ‘VIP’ winner will receive the very first board to roll off the presses – which will be signed – courtesy of The Works on Taunton High Street.

“The winner “will get to be a real Taunton VIP for the day,” promises GAMES EXECUTIVE Natasha Rebuck. She added: “That’s Very Important Player, as well as Person. The board is a love letter to Taunton and we are searching for someone who loves the town the most to get the first board.”

The Works presentation to the winner will be made by perhaps the biggest VIP of them all – Mr MONOPOLY in costume!

As well as announcing a ‘VIP’ search, Ms Rebuck also today reveals that Somerset County Cricket Club has landed on a “leading” space on the new game AND will be hosting the official launch at the prestigious and plush 1875 Club, which is situated in the Somerset Pavilion.

The club is the very first landmark to be announced as making it onto the board.

Ms Rebuck adds: “The board will feature the great and the good of Taunton. We are delighted to be announcing today that Somerset County Cricket Club is featuring prominently in the game on a leading space and also hosting the official launch of the board in October.

Ms Rebuck is a CUSTOM GAMES EXECUTIVE at WINNING MOVES UK, makers of the new MONOPOLY: Taunton Edition board under official license from Hasbro. She adds: “Around 30 Taunton landmarks will take over the legendary MONOPOLY streets and addresses made famous on the original London board from Mayfair to Old Kent Road. The launch will be at Somerset County Cricket Ground at exactly the same time as the game goes on shop shelves in Taunton and Somerset – AND the world. We say globally as the game will be for sale widely online, including on Amazon. From the votes that came in suggesting landmarks to fill the board we noted a few were from Australia and Canada from ex-pats. We are expecting the game to be whizzing across the globe come this Christmas.”

Jez Curwin, Head of Commercial Operations at Somerset County Cricket Club, said today:  “We are delighted to be both included on a prominent position on the board and to be hosting the official launch. The ‘VIP’ winner will get to be as famous – if only for a day – as some of the world names that have graced the pitch here from Sir Viv Richards to Sir Ian Botham.”

Winning Moves UK say that the exact location the club will occupy won’t be revealed until the game is out but that it is “very prominent”.

The game, out well in time for Christmas, is also proving hot property with retailers. The following Taunton stores have announced they will each be stocking the new game, with all having already put in “huge” advance order numbers, according to Winning Moves UK: The Works, Argos, Waterstones and WHSmith. The unique edition will also be very widely available online, including at the world’s biggest online retailer Amazon.

The public were invited earlier in the year to vote for what should feature in the edition. And as well featuring Taunton landmarks on the board,  the Chance and Community Chest cards will be town themed too, incorporating many of the public’s suggestions. Adds Ms Rebuck.  “We would like to thank each and every person who voted for Taunton landmarks and made suggestions for the cards. The suggestions were wonderful and very many are being incorporated in the game.”

To be in with a chance of being the VIP for the day just email VIP@winningmoves.co.uk on “Why I am in Love with Taunton’. Starting date from today. Entries close at 23.59pm on 20th September 2017.