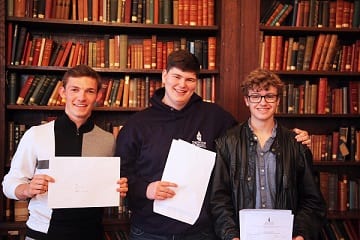 Today’s excellent A Level and BTEC results follow on from the School’s outstanding International Baccalaureate scores last month. Taking all three programmes together, 46% of our sixth formers’ grades this summer were A*- A or equivalent – a tremendous achievement for a non-selective school.

Top A Level achiever Jonti Ruell, from near Wiveliscombe, who previously attended Kingsmead School before joining Taunton School on an academic scholarship in the Sixth Form, achieved an amazing 3A* and an A grade. He is heading to Durham University to read Maths. Jonti, who took part in Ten Tors and played 1st team rugby, badminton and cricket, said: “I was surprised, I didn’t expect to do as well as I did. I am proud that I got into the university I wanted. The teachers at Taunton School have been very helpful and they are of a high quality.”

Will Doherty, from near Wiveliscombe, who joined Taunton Pre-Prep in Year 2, achieved 2A* and 2A grades in English, Latin, History and Critical Thinking. Will said: “I am really happy, it feels really satisfying at the end of my time here to get the recognition of the hard work that has gone in. I got into UCL to read English which I am really excited about as going to London is going to be something new. For me, the most important thing at Taunton School has been the teachers, I want to say a big thank you to them.” Will hopes to forge his career in law.

Oxbridge student Abigail Casson is heading to Lady Margaret Hall, Oxford, to read History after achieving the grades she needed in Early History, Classical Civilisation and Drama. Abigail, from Nether Stowey, started at Taunton School in Year 9. She will be joining gap year student Kieran Bailey, who was Taunton School’s highest achiever last year, and who will be taking up his unconditional place to read History at Christ Church, Oxford.

Ned Travers, from Hemyock, who joined Taunton School in the Sixth Form and previously attended Uffculme School, gained 2A* in Maths and Biology and an A in Economics. Ned, who was deputy head boy,1st team football captain and also played cricket, said: “I am relieved and delighted to have done better than I expected. I am grateful for the support that I have had over the last two years coming into a new school where I did not know anyone. There is a great support team all through the school and the opportunities to balance work with social life.” Ned has been accepted into Bath University but is planning on taking a gap year first to work and travel.

Edward Shattock, from Taunton, achieved three As in English Literature, History and Religious Studies, as well as an A in Critical Thinking and his EPQ. He joined Taunton School in Year 7 after leaving Bishop Henderson Primary School and is off to read Theology at St Andrews. He plans to become a prosecuting barrister in criminal law. Edward said: “I am ecstatic. I thought that my exams went well so I was expecting to get around these grades so I am really happy. At Taunton School there are so many teachers that you can go to see for one to ones when you need them. They go the extra mile.”

At A Level more subjects are now linear, with exams taken at the end of two years, so the challenge for students this year was greater than a few years ago. Subjects which returned particularly pleasing A Level results include Maths, English, MFL, History and Classics.

BTEC Sport and Exercise Science extended diploma students achieved their best results ever with 83% gaining distinction* or distinction (equivalent to A* and A) and 97% achieving distinction* to merit (equivalent to A*-C). An amazing 7 (58% of the cohort) achieved the top mark of D*D*D*, with students receiving offers from top institutions such as Bath and Birmingham to study Sport and Exercise Science.

Among them were Amelia Davies and Matt Alvarez. Amelia, from Taunton, who joined Taunton School in Year 9 having previously attended Castle School, said: “I am absolutely over the moon and I am off to Bath to read Sport and Social Sciences. The support available at Taunton School if ever I needed help and the opportunities have been excellent.” Amelia is considering becoming a PE teacher or joining the Army. She has been involved in music, CCF and sport at Taunton School. She was captain of the tennis team and represented the first teams for hockey, athletics, netball and cricket.

Matt, from Cotford St Luke, joined Taunton School in the Sixth Form on a sports scholarship having previously been at Kingsmead School. Matt said: “I am really happy, it’s made all my hard work worth it. I hope to go to an American university next year on a sports scholarship. The atmosphere at Taunton School gave me a chance to focus and achieve without being easily distracted.” Matt is taking a gap year to volunteer in Africa working with young entrepreneurs and then travelling to Australia. He is also training hard with Taunton Athletics Club in the 400m and hopes to gain a GB junior vest next year.

In July, Taunton School IB students celebrated its second best scores on record, with an average points score per candidate of 34.3, putting them more than 4 points ahead of the world average of 30. Callum Macintyre, achieved an amazing score of 42 points out of a maximum of 45.

Headmaster Lee Glaser said: “Young people today are criticised on a regular basis. This is unfair as they work extremely hard and have to cope with enormous pressure. I am proud of every single student for the work they have put in and for the resilience they have shown in achieving these excellent results. They are role models for many members of older, and so called wiser, generations.”