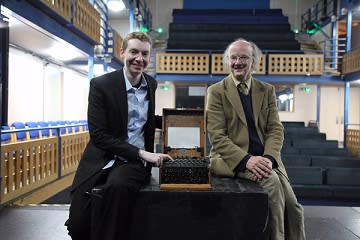 A rare original WWII Enigma Machine was brought to Taunton School recently, when students had the opportunity to learn the science of code-breaking.

Noted mathematician and public speaker Dr James Grime visited Taunton School to speak to students aged 10 to 18 in a series of lectures and workshops about the secretive world of codebreaking.

On display was one of the original WWII Enigma Machines, which is still in working order. Enigma is most famously known for the apparent unbreakable German code that mathematician Alan Turing managed to decipher during World War II, in a pivotal moment leading to Allied victory over Nazi Germany.

After a day of workshops where students were able to operate the Enigma Machine, Dr Grime gave a fascinating presentation to a full theatre of students, staff and parents that delved deeper into the world of code making and breaking.

The talk led the audience from the origins of coding some 3000 years ago with the Spartans through to the work carried out at Bletchley Park.

Dr Grime is the current custodian of a truly rare and unique piece of history and his original WWII Enigma machine was used in his talk and demonstrations.

The event was organised by Dr James Penny, Head of Science at Taunton School, who commented: “The day was a great success, with a lot of students being involved and inspired by this incredible historic artefact.”