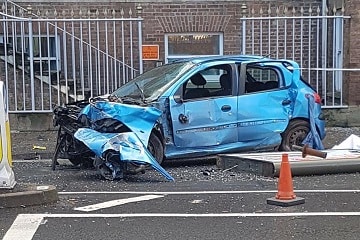 Commuters coming into Taunton this morning (Mon 12th Nov) faced long delays as Police closed East Reach in both directions after an accident.

A blue Peugeot 206 crashed into the bus stop outside of the old hospital early this morning.

A spokesperson at the South West Ambulance Service said: “We were called out at 4:43am this morning to reports of a road traffic collision & one person was taken to Musgrove Park Hospital with a head injury.”

Traffic was being diverted as queues formed back to Creech Castle and The buses of Somerset reported the 21 service was unable to get to Hamilton Rd, Halcon Corner and East Reach.

Police are controlling the situation as the bus stop was heavily damaged in the accident.

Traffic is still heavy in the area.

Officers subsequently arrested a man on suspicion of drink driving. He remains in police custody at the time of writing.

Anyone with any information which could help police enquiries into this incident is asked to get in touch through www.avonandsomerset.police.uk/contact, or by calling 101, quoting reference 5218251570.