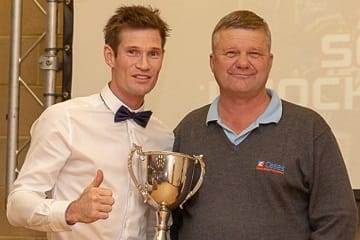 Three riders swept away the honours as the ‘Cases’ Rebels brought their hugely successful 2018 campaign to a close, on Friday night (2nd November) with the club’s Presentation evening.

A well-attended event at the Oaktree saw number one Jason Doyle collect the prestigious Rider of the Year trophy, together with the Fastest Time of the Season (56.0 seconds recorded on August 15th against Belle Vue), whilst the gathering heard from Jack Holder who took triple honours by swooping the categories of Most Improved Rider, Most Entertaining Rider and the Track Staff Rider of the Year.

Holder was presented with his trophies prior to returning to Australia for the winter, the young Aussie expressing his wish to return as a Rebel in 2019 if the rules agreed at Conference permit.

Mid-season signing Nico Covatti flew in from his Italian domicile especially for the event and was honoured with the SREF Rider of the Year trophy.

The ‘Cases’ Rebels reached the semi-finals of the play-offs for the first time ever at top tier racing, only missing out on a place in the final after the heart-breaking 30th race against neighbours Poole, but then bounced back to win the Knockout Cup against King’s Lynn.