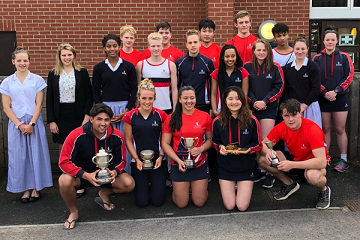 Taunton School Preparatory and Senior swimmers had a weekend of success in the pool, competing at the National IAPS Finals and dominating in the annual local Meade King Cup.

Known to be the oldest swimming competition in the world between more than two schools, The Meade King Cup saw swimming teams from King’s College, Wellington School and Queen’s College come together at Taunton School to battle it out.

Head of Swimming at Taunton School, Lisa Manley said: “This was an excellent way to finish off another unbeaten swimming season for the Senior Taunton School swimmers. A huge well done to all.”

“The following day 17 Taunton Preparatory School pupils, the only school from Taunton to be represented, travelled up to the London Aquatic Centre in Stratford (home of the London 2012 Olympics) for the finals of the IAPS National Competition.”

“Only the top 16-20 individual and relay teams in the country were invited, so the pupils had already achieved a huge amount just by qualifying from the regional rounds.”

“A special well done to Skye McLaughlin (U13) for winning the 25m butterfly and Oliver Heard (U13) for finishing 3rd in the 50m backstroke, both amazing achievements. Several pupils set new PB’s.”