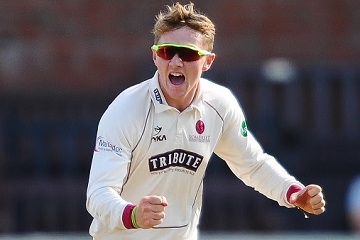 Dom Bess has put pen to paper on a new contract extension.

The 20-year-old off-spinner has signed a new two-year deal which will see him playing for Somerset until at least the end of the 2020 season.

After signing his new contract Dom said: “I’m really excited about the next three years and I can’t wait for the season to start. It means a massive amount to me to play for Somerset and I’m really grateful to everyone who has given me the opportunity to get to where I am.

“I love this Club and there are so many great people here. It’s something very special to walk out on to the field here and the fans are awesome. Hopefully I can push on now and help the Club to be successful.”

Dom made his first Somerset appearance against Pakistan at the Cooper Associates County Ground in June 2016 and shortly afterwards he made headlines by taking six for 21 on his Specsavers County Championship debut against Warwickshire.

Somerset Director of Cricket Andy Hurry is delighted that Dom has committed himself to the Club for the next three years. “Having progressed through the Devon age group system and Somerset Academy, Dom has demonstrated that he is a player of great potential,” he said. “This has recently been recognised with his selection in both the four-day and one-day ECB Lions squads that will tour the West Indies this winter. We are really pleased that one of the most exciting young spinners in the country has committed his future to the Club.”