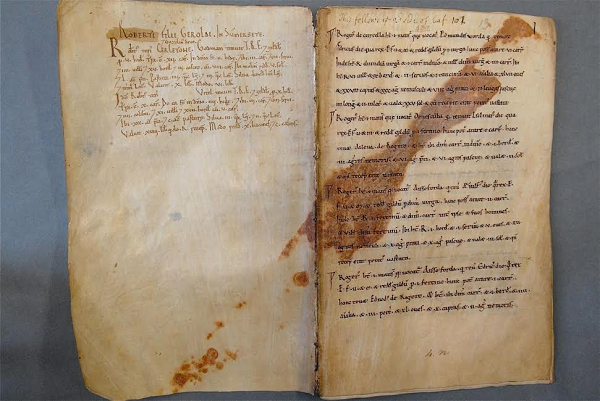 A unique document from the age of William the Conqueror is going on display at The Museum of Somerset in Taunton during February and March.

Known as ‘Exon Domesday’, the document was created in 1086 as part of a vast survey of England ordered by its Norman conqueror, William I. It has been preserved for many centuries in Exeter Cathedral Library and is named after the Latin word for Exeter (Exonia).

The document is the most detailed surviving draft of Domesday Book, perhaps the most famous book in English history, and covers the five western counties of Cornwall, Devon, Somerset, Dorset and Wiltshire, although not all of it has survived.

Its 532 parchment pages give a remarkable picture of the landscape and people of the South West at the time the Normans were taking control and include much information that Domesday Book leaves out, including unique accounts of the levying of the geld, the principal royal tax.

“We are deeply grateful to the Dean and Chapter of Exeter Cathedral for allowing us to display Somerset sections from Exon Domesday,’ Tom Mayberry, Chief Executive of the South West Heritage Trust, said. “It is an extraordinary document and a unique survival. Without it we would know far less about South West England in those turbulent years of conquest and change.”

In 2011 Exon Domesday was removed from its nineteenth-century binding so that digital photography and detailed study could begin. Since then a major research project by a team from King’s College London and the University of Oxford, funded by the Arts and Humanities Research Council, has been uncovering the document’s secrets. One strange and unexplained discovery was the mark of a medieval spearhead imprinted across two of the Somerset pages.

Two talks at the Museum of Somerset by members of the project team will explain Exon Domesday and the research project while the document is on display. On Thursday 9 March at 7.30 pm Dr Frank Thorn, the foremost living editor and translator of Domesday Book, will speak about Exon Domesday in the Great Hall at the museum (tickets £8.50). On Friday 10 March at 2.30 pm Dr Chris Lewis of King’s College London will speak as part of the Talk and Tea series (tickets £5). Tickets can be booked on 01823 255088.

The exhibition runs from Saturday 4 February to Saturday 1 April. Admission is free.

The Museum of Somerset is part of The South West Heritage Trust, an independent charity committed to protecting and celebrating Somerset and Devon’s rich heritage.