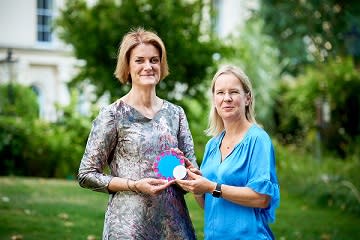 A specialist gastroenterology community dietitian at Somerset Partnership NHS Foundation Trust has been named Allied Health Professional (AHP) of the year at a prestigious awards ceremony.

Marianne Williams was given the accolade at the NHS England’s Chief Allied Health Professional Officers Awards on 19 June.

The awards highlight and celebrate the outstanding contribution made by AHPs to improving health, care and wellbeing for patients and communities. As well as winning the overall award, Marianne and the irritable bowel syndrome (IBS) and food allergy gastroenterology dietetic team also won the digital practice award for their work in helping people in Somerset who have IBS.

It was for their work in adding dietetic-led patient-focused webinars to the IBS patient pathway to help improve IBS self-management in Somerset.

Marianne said: “It was a real shock when I went up to collect the award for the allied health professional of the year but I am absolutely delighted. “I’m also delighted that we won the digital practice award and for the team to be
recognised for the work we have done. “The webinars give patients the opportunity to access accurate and reliable information from the comfort of their own home and we’re looking to build on the success of these and to offer more to patients with IBS and who are coeliac patients.”

“A total of 100 per cent of our attendees said they would recommend the webinars, with four in five finding them easy to use and 82 per cent stating the webinars increased their confidence in managing their IBS symptoms. “We are absolutely thrilled to have won this award and it would not have been possible to set this project up without being part of the NHS England 100 Project in 2017 and without the dedicated help of our community dietetic team.”

The team is part of the wider community dietetic team and dietitians currently working in the team alongside Marianne including Ceri Marchant and Leah Seamark.