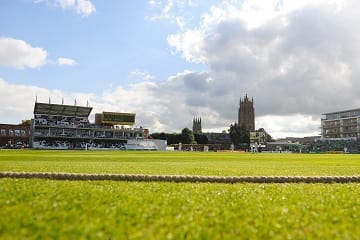 The County Ground, Taunton has been awarded three games at the ICC Cricket World Cup 2019 as the tournament returns to England and Wales next year.

The opening fixture at Taunton will be played under the soon to be installed floodlights when Afghanistan face New Zealand on Saturday 8 June 2019. The second fixture will be highly anticipated by all when the current champions face the winners of the Champions Trophy with Pakistan v Australia on Wednesday 12 June 2019. Finally, Taunton will host Bangladesh v West Indies on Monday 17 June 2019.

England will play the opening match of the ICC Cricket World Cup England and Wales 2019 at The Oval against South Africa on 30 May 2019.

The tournament will culminate in a record fifth final at a packed Lord’s Cricket Ground – the Home of Cricket – on 14 July 2019.

In total, 11 venues will be used for the 12th edition of the ICC Cricket World Cup. Lord’s and The Oval will be used in London, in addition to Edgbaston, Old Trafford, Bristol County Ground, Cardiff Wales Stadium, The Riverside, Headingley, Hampshire Bowl, Trent Bridge and The County Ground, Taunton.

Somerset CEO Andrew Cornish is delighted with our fixtures: “Somerset County Cricket Club are honoured to be a host venue for the ICC Cricket World Cup  2019. Today’s announcement of the finalised fixtures brings in to sharp focus exactly what cricket fans can expect to enjoy in June next year.

“To open our fixtures with a day/night game will be outstanding. An international match under lights featuring the team who finished as runners up in the last tournament is the perfect way for us to showcase what Taunton has to offer.

“To be able to follow that fixture with a clash between the current World Champions and the Champions Trophy holders is a genuine feather in the cap for us.

“Given our links to the West Indies over the years, I am sure that their visit will also prove to be hugely popular with cricket fans in the region and, of course, further afield.

“We saw in 2017 with our IT20 that the appetite for International cricket here in the South West is enormous. That match proved to be of huge benefit to the local economy as a whole and it is excellent news for the whole region that these matches will be held in Taunton next summer.

“I am in no doubt that these matches will be hugely memorable for everyone who attends, and we are delighted to be part of what promises to be a genuine festival of cricket.”

Cllr Mark Edwards, Deputy Leader of Taunton Deane Borough Council, said: “It’s brilliant to be part of all the cricket celebrations for next year’s Cricket World Cup. Sports fans can be assured of a very warm welcome and we hope they enjoy visiting this beautiful part of the world. The cricket ground itself is in the heart of the town – a wonderful setting for a world competition.”

Steve Elworthy, the ECB Tournament Director, added: ‘‘Today’s announcement of the schedule is another important moment in the build-up to the ICC Cricket World Cup 2019 – the moment that the tournament comes to life for teams and cricket lovers across the world. This is the flagship event in one day cricket.

“There are some fantastic head to head fixtures – England v Australia at Lord’s and India v Pakistan at Old Trafford as well as England v India at Edgbaston spring to mind. As organisers we can promise the teams and fans we will work hard to provide the perfect stage for this event.

“Because of the UK’s diverse population, every competing team will also be guaranteed a ‘home crowd’ every time they play at some of the most iconic cricket grounds in the world.

“The Cricket World Cup is the 3rd most watched global event and has huge interest and appeal amongst cricket fans. Our ambition is to grow the game and deliver the greatest ever cricket celebration and with that in mind we have very carefully developed our ticket prices. The prices have been tested with thousands of fans over the last 6 months, we have used external experts and consulted widely to ensure that they are good value vs other global sporting events. The prices balance accessibility with delivering the investment required to deliver a world class event. All revenue is invested back in the game to grow cricket. Notably, we will offer:

After facing South Africa at The Oval, England will then play ICC Champions Trophy 2017 winners Pakistan at Nottingham on 3 June, Bangladesh at Cardiff on 8 June, the Windies at Southampton 14 June and Afghanistan at Old Trafford on 18 June.

In the all-play-all 10-team format, England will conclude their first-round matches against the 1996 champions Sri Lanka at Headingley on 21 June, then Australia at Lord’s on 25 June, India at Edgbaston on 30 June and New Zealand at Durham on 3 July.

Reigning champions Australia start against qualifiers Afghanistan at Bristol in a day/night fixture on 1 June, the ICC Champions Trophy holders Pakistan will play the 1975 and 1979 ICC Cricket World Cup winners West Indies on 31 May at Trent Bridge in their first fixture while India’s opening game is against South Africa on 5 June at Southampton.