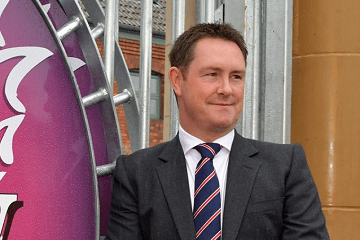 Lee Cooper, Chief Executive of Somerset County Cricket Club has announced that he is to stand down from his position as soon as a suitable replacement can be found.

In a statement issued by the Club, Mr Cooper said: “When I took up the role of Chief Executive at Somerset County Cricket Club I assured the then Chairman and the Committee that I would be able to fulfil my duties whilst standing aside completely from my former responsibilities with Cooper Associates, the business I founded some years ago. It has become increasingly apparent to me that it has not been as straight forward as I envisaged to do so.

“I do not believe that it is fair to the Club that I continue as Chief Executive if it is likely that other business commitments begin to affect the amount of time that I can properly devote to its affairs. As you can imagine this has been an extremely difficult decision.

“It has been a long held personal ambition of mine to work with and for Somerset County Cricket Club and to be offered the position last year was an enormous honour.  I have thoroughly enjoyed working alongside Andy Nash and Charles Clark together with the Somerset Committees, for all of whom I have enormous admiration and respect and many of whom have become good friends.  In particular I have enjoyed working alongside the superb staff at the Club and the coaching and playing staff too.

“I shall continue to do all that I can to assist the Club to progress and I am of course proud of the Cooper Associates sponsorship of the ground.  We’ve been working hard to secure a first class successor and I wish the Club every success on and off the field in the months and years to come”.

Charles Clark, SCCC Chairman, speaking on behalf of the Club, said: “I have been aware for some time that Lee has been facing some very challenging personal decisions. He has made it clear that at all times he wishes to act in the best interests of the Club. Whilst his tenure has been relatively short he has impressed all who have come into contact with him with his enormous work ethic, diligence, openness, organisational capabilities, courage, determination and passion for our Cricket Club.

“He has left an extremely positive mark in very many ways and the changes he has implemented will serve the Club well for many years to come. A particular accomplishment was the restructuring of the cricketing department resulting in the return of the excellent Andy Hurry. I know that he feels that in standing aside he may be letting the Club down but he has nothing for which to apologise. These things are in the nature of businesses and organisations.

“On behalf of the entire Club I would like to thank Lee for his very great efforts over the past year. As always, the Club moves forward. Lee will, I am sure, have a part to play in the future. For now, he remains firmly in post until an appointment is made and that process is already well underway”.