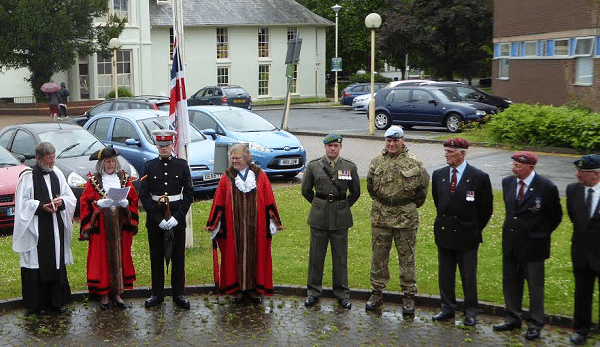 The Armed Forces Day flag was raised outside Deane House on Monday (20 June) at a short ceremony led by the Mayor of Taunton Deane, Councillor Vivienne Stock-Williams.

The flag is being flown for the week leading up to the eighth National Armed Forces Day on Saturday 25 June which celebrates the commitment of current and ex-servicemen and women.

The Mayor’s Cadet, Lance Corporal Paul Bowler, who was chosen to provide support at community events throughout the year, was also there along with the Deputy Mayor, Cllr Hazel Prior-Sankey.

Cllr Stock-Williams said: “The Council is proud to show its support for the Armed Forces, who have a long association with Taunton Deane. Respect shown by the local community goes a long way to sustaining the morale of the Armed Forces and their families on this day and throughout the year.”