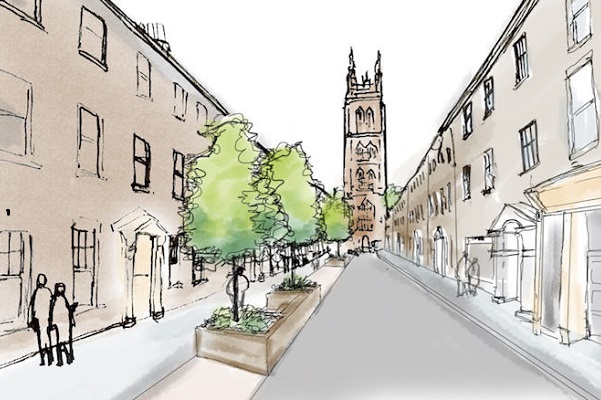 Taunton Deane Borough Council is launching a public consultation to present its suggestions for a new and improved Taunton town centre and seek people’s views.

The proposals, outlined in January, include changes to East Street, Hammet Street and St James Street which would redirect traffic to more appropriate routes. The overall aim is to create a thriving town centre environment that is more attractive and inviting for pedestrians and cyclists, is less polluted and noisy, and is better for businesses.

The project goes hand-in- hand with Taunton’s New Year designation as one of a new wave of Garden Towns and is a key part of its growth programme.

On 18 January 2017, the Council and its appointed transport and urban design specialists WSP | Parsons Brinckerhoff met with some of the owners and managers of shops and businesses that could be directly affected by changes to town centre streets.

The Council explored their needs and concerns, and their general views on the draft proposals.

Cllr Roger Habgood, Executive member for planning and transport, said: “When we met with the many businesses with an interest in the town centre at this pre-consultation session, we received some very useful feedback which was vital in shaping the proposals to be shown at the public exhibition.

“I would like to thank all who got involved and shared their thoughts with us – we all want to see Taunton thrive and realise its ambitions, especially now we are one of three new Garden Towns nationally.”

A public exhibition of the town centre improvements will be held at Taunton Library in Paul Street during normal library opening hours. It will run from Tuesday 21 February to Saturday 18 March 2017. The exhibition will include information on the proposed changes and a questionnaire to seek the views of the public.

Council officers will be in the library to discuss the proposals on:

Exhibition information and an online version of the questionnaire are available at www.taunton.uk.com. You can email the project team at psip@tauntondeane.gov.uk or write to them at Taunton Town Centre PSIP, The Deane House, Belvedere Road, Taunton TA1 1HE

Cllr Habgood added, “I would encourage anybody interested in the future of our town centre to visit the public exhibition and discuss the proposals with the project team.

We want the views of people from across Taunton to make sure we understand the needs of shoppers, visitors and retailers.”

If the proposals gain support, the Council would introduce the changes on a trial basis in autumn 2017. The pilot scheme would run for 18 months to monitor and assess the changes before any permanent public space changes come into effect in 2019.