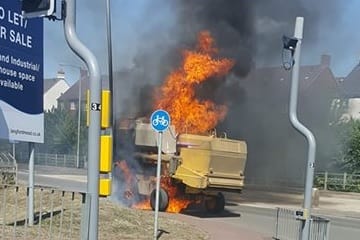 Emergency services were called out to a busy junction in Taunton yesterday afternoon. (Sun Aug 5th) around 2.40pm.

One fire appliance from Taunton, one from Wellington and one from Bridgwater attended a fire involving a combine harvester on fire at the side of the road at Silk Mills Lane.

Crews got to work with four breathing apparatus, two hose reel jets, one compressed air foam jets and a triple extension ladder. The fire was deemed accidental ignition. A small amount of diesel fuel had entered the drains, so the environment agency were informed, and the local council to see to the street lights that were involved and damaged in the incident.