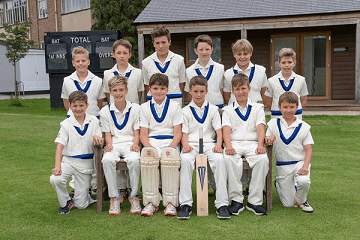 Taunton Preparatory School cricket teams are celebrating after winning all three Somerset School’s County Cup semi-finals, with the U11 team progressing on to the National Finals.

Just before the half term break Taunton Preparatory School Under 11s played Millfield Preparatory School. The team, led by pupil Cole Willoughby, were chasing Millfield’s total of 257 in the allotted 12 over pairs format of the game and ended up winning by an impressive 14 runs.

Next in the County semi-finals was the turn of the Under 12s who played King’s Hall. Batting first were King’s Hall who set a respectable score of 158 off their 25 overs. It was Fin Robertson (68) and Kian Roberts (55 not out) who put on a partnership of 106 which saw Taunton Prep triumph once again, with only one ball to spare.

The next age group county semi-final saw Taunton Preparatory Under 13s welcoming visitors Queen’s College. Queen’s set a score of 123 to win off their 25 overs. After a strong start from Taylor Flitton and Kian Roberts it was left for Ollie Heard (30 not out) and Findlay Robertson (44 not out) to see Taunton Prep win with 7 overs to spare.

The Under 11s will now represent the South West in the National Finals on 11 th July. If the Under 12s win then they play in the national cup next year as Under 13s and represent Somerset in the knock out competition with all the other winners across the UK.

Shaun Winsor commented: “I’m so proud of all of our young cricketers for some outstanding performances. They represented the school brilliantly and I’m confident they’ve got what it takes to achieve success in future competitions.”