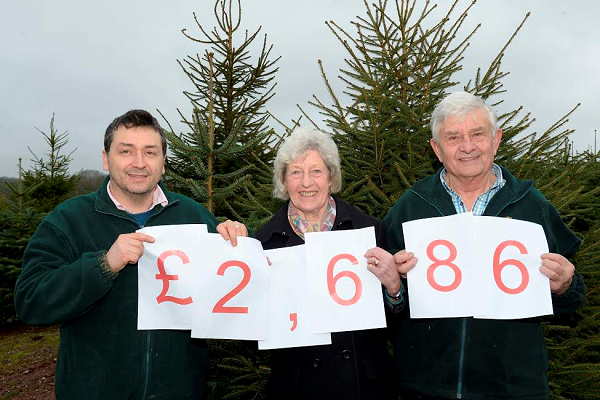 A SOUTH West children’s charity has received £2,686 from a Christmas tree farm in Somerset.

The funds were raised for Children’s Hospice South West (CHSW) by staff and customers at Langford Lakes Christmas Tree Farm during November and December last year.

Reg Hendy, owner of Langford Lakes Christmas Tree Farm, which is based at Middle Hill Farm in Langford Budville, explained: “We’re delighted that we managed to collect a fantastic amount of money for CHSW. We raised £2,686 by providing visitors to our farm with teas, coffees and mince pies in return for a donation to the charity.

“We were ably assisted with these efforts by the Wellington Friends Group of CHSW who have been tremendous throughout. Without our customers’ assistance, this would not have been possible so a huge thanks goes to them. We’re delighted to have collected so much.”

CHSW is currently the only provider of specialist hospice care for children in the region. It offers much needed support for youngsters with a life-limiting or life-threatening condition and their families at its three hospices: Charlton Farm in North Somerset, Little Bridge House in North Devon and Little Harbour in Cornwall.

Paula Garrett, Community Fundraiser for CHSW, said: “We’re so lucky at CHSW to have such wonderful support from Langford Lakes Christmas Tree Farm. It’s such a great way to raise awareness and funds. I know the friends group thoroughly enjoyed themselves while they were on refreshment duty.

“The money will go towards the work we do for our three children’s hospices so we would like to say a huge ‘thank you’ to all of the staff and customers who have been so generous in 2016.”

Langford Lakes Christmas Tree Farm, which is well-known for its home grown, freshly cut Christmas trees, is a family run 40-acre farm that is located close to the nature reserve Langford Heathfield, a mile outside of Langford Budville in Somerset.

It is a family-run farm, owned and run by Reg and his wife Ann and their two sons, Shaun and Nick. The family has been growing and selling Christmas trees for more than 20 years.