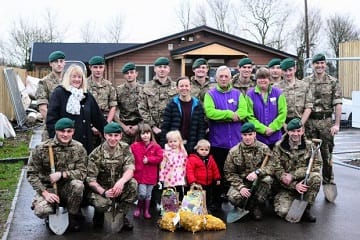 A new nursery has opened its doors on the site of a Taunton garden centre thanks to a unique partnership between a local charity which supports the Royal Marines and Somerset County Council.

The Brambles nursery opened early this month on the Wyevale Garden Centre in Pen Elm, close to Norton Manor Camp, the current home of 40 Commando Royal Marines.  It’s an exciting new early learning facility developed with close co-operation between Go Commando, a charity which supports Royal Marines personnel and their families, and the Council.

The building has been funded by Somerset County Council, Go Commando and the Department for Education as one of the key capital projects in the county to support the new 30 hours offer for working parents of three and four- year-olds.

As well as being open to families from the local community, the main priority of the Brambles is to support children from military families with the opportunity to integrate further with the community in which they live.

Somerset County Council’s Cabinet Member for Children and Families Councillor Frances Nicholson welcomed the development, saying: “I wholeheartedly welcome the opening of the Brambles.  It is a real example of what can be achieved through working together and I wish this new venture every success.”

Kevin de Val, Chair of Go Commando, added: “We are most grateful for the help and support given by Somerset County Council in developing this unique charitable initiative.

“We are confident that the facility will provide an outstanding early learning experience for our children.”

The nursery is situated almost opposite 40 Commando Royal Marines on the A358, next to the Wyevale Garden Centre.

It takes children from six months to school age and is open for 50 weeks a year. For more information go to The Brambles website: