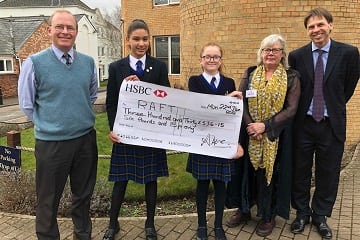 Taunton Preparatory School children have donated over £330 to local charity RAFT (Refugee Aid from Taunton), after holding a jumble sale.

The Preparatory School children were proud to be able to present a cheque for £336.15 to RAFT, the Refugee Aid charity in Taunton. This sum of money was raised as a result of a jumble sale held at the end of the autumn term, which was set up and organised by Year 7 pupils.

Lesley Gates, a volunteer from RAFT, visited the school assembly to receive the cheque from Year 7 pupil Ben Redrup, and thanked the children for their generosity. She informed them that the money would go towards helping the refugees in Bangladesh and would be spent on such items as toiletries, water and cooking equipment.

After the assembly, children and staff filled up Lesley’s car with all the bags of unsold items from the sale, which will further support the situation of the refugees that are helped by RAFT.

This donation continues the ongoing support to the local charity. Back in October, a group of year 7 children visited the RAFT warehouse to help sort clothing and pack boxes ready for shipping to those in need.