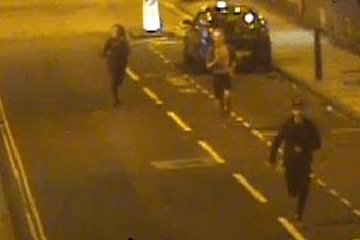 Avon & Somerset Police are appealing for help to trace the people on this CCTV as part of their investigation into an apparently unprovoked assault on two men in Taunton.

The pair reported that they were set upon as they walked home from a night out. The incident happened at about 12.30am on Saturday 2 June in Fore Street.

The men, aged 22 and 25 and from Taunton, told officers they were attacked by four people using a plank of wood with nails in it.

Both men required hospital treatment, including stitches, for cuts and puncture wounds to the head and body as a result. The younger man also has a broken hand. Officers recovered the suspected weapon abandoned in a litter bin in Fore Street.

One of the suspects was described as a man with dark blond hair, clean shaven, who was wearing green shorts and a blue T-shirt.

CCTV shows these people were in the area at around that time and officers would like them to come forward as they may be able to help.

Anyone who recognises the individuals on the CCTV, or who has any other information which could help the police investigation, is asked to get in touch through www.avonandsomerset.police.uk/contact or by calling 101, reference 5218120153

Alternatively ring the independent charity Crimestoppers on 0800 555 111. They never ask your name or trace your call. You could even qualify for a reward and still remain anonymous.