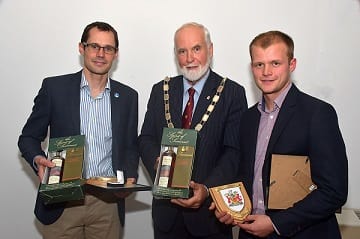 The Chairman of Somerset County Council has presented four cave divers with the authority’s first ever awards for bravery.

As part of his annual Chairman’s Awards, Councillor Nigel Taylor gave commemorative shields for valour to the local heroes involved in the dramatic Thai cave rescue earlier this year.

Chris Jewel, Connor Roe, Josh Bratchley, and John Volanthen were among 41 residents to receive awards in recognition of their contribution to the county and its communities.

All received a Chairman’s award with certificate and pin-badge, except the cave divers who took home their shields – the first of their kind to be presented by the Council Chairman.

Over a number of years the caving heroes have honed their skills in the flooded caves of the Wookey Hole Caves complex. In July they found themselves at the centre of world news in July headlines when they spear-headed the rescue of a youth football team trapped in caves in Thailand.

Chris, from Cheddar, and Connor, Axbridge, attended the awards evening at Taunton Rugby Club. Cllr Taylor, who is himself an experienced caver, was delighted to have the opportunity to give personal thanks to them for their courageous exploits.

“This was a remarkable feat of bravery and skill,” he said. “They are a credit to the county and in my role as Chairman I am proud to have been able to honour their achievements.”

“Everyone who has received an award has done something remarkable. They are making a real difference to communities across the county. Somerset wouldn’t be Somerset if it was not for people like this and it’s a privilege to be able to say thank you on behalf of the council.”