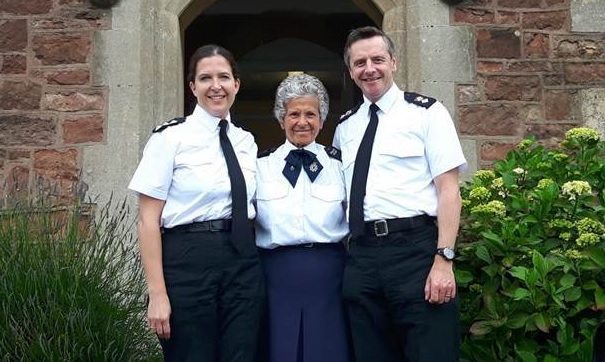 AVON and Somerset Police have been marking the service achievements of their officers and staff over the last two weeks.

Ten officers from Somerset received their Long Service & Good Conduct award at a ceremony held at Police HQ in Portishead.

The officers have all completed over 20 years in service, and each received a scroll outlining their personal service history.  They included:

Going above and beyond the 20 years service required for Long Service, Good Conduct – Front Office staff member Ann Dowell MBE, from Williton Police Station, is retiring at the end of 52 years of service to the force.

Ann joined, what was then Somerset Police, in 1964 as a typist based at Bridgwater. She then transferred to Williton in 1973, where she became part of the Front Office team and has been stationed there ever since.

C/Supt Wylie, District Commander, said of Ann: “She has literally been the face of policing in Williton for almost 44 years. She has been dedicated and valuable member of police staff, providing support to colleagues and a friendly, welcoming and efficient face to members of the public.

“She will be deeply missed by officers, staff and the community but after 52 years she deserves to put her feet up! We wish her a long and very happy retirement.”

The actions of Special Constable Nicholas Genge, also from Williton, were also recognised when he was awarded a District Commander’s Commendation for bravery.

On 26 February 2016, SC Genge and another PC were on duty in Watchet, when they came across a group of people arguing. On trying to calm the situation the PC was assaulted and knocked unconscious. Despite then being assaulted himself, SC Genge was able to stop the attack and protect his colleague from further injury, standing over him until other police officers and an ambulance arrived. Despite this, SC Genge remained on duty for the remainder of the shift demonstrating his dedication to duty.

C/Supt Wylie commented: “I commend SC Genge for his actions and bravery during this traumatic ordeal. He put the welfare of his colleague over his own and dealt with the situation calmly and effectively.

“We are enormously grateful to him, and to everyone who provides service and time to the Constabulary voluntarily be that as a Special Constable, Cadet or another voluntary role.

“SC Genge went above and beyond in this situation and I am delighted to honour and recognise this.”