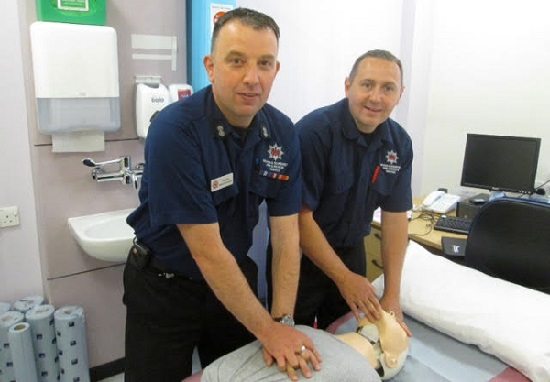 The BHF Heart Hero Awards recognise and celebrate exceptional contributions to the fight against heart disease. Watch Manager, Phil Musgrove and Firefighter Richard Flavin have been shortlisted in the innovation category in recognition for their work as instructors for Heartstart Somerset.

Phil and Richard qualified as BHF Heartstart Instructors in November 2009 when the scheme was first introduced to the Fire Services Somerset Command. To date they have trained over 2,659 members of the public on how to perform CPR and the effective use of a public access AED.

In a moving and very personal story, WM Phil Musgrove tells students on his courses of the evening he performed CPR on his wife Paula. He had returned from a fire shout in the middle of the night and was awoken by his daughter complaining that his snoring was keeping her awake.

Phil quickly realised that the noise was actually his wife in the same bed. She was experiencing Agonal Breathing (this is medically defined as noisy infrequent gasping breaths) and a sign that someone is in cardiac arrest. Phil performed CPR and paramedics were quickly on the scene. Thankfully Paula has made a successful recovery made possible by Phil’s actions.

Then in 2015 a defib was placed by the Heartstart team in the Spar shop at Williton. Phil Musgrove with the support of Williton fire crew delivered community training in Williton.

Early this year, 61 year old Paul Dimmock from nearby Watchet went into cardiac arrest on the forecourt of the Shell Garage near the Spar shop.  Williton retained firefighter Guy Denton used the AED to deliver three shocks that along with 20 minutes of CPR kept Mr Dimmock alive until a helicopter arrived to take him to hospital. Having survived, Mr Dimmock has now pledged to help support the Heartstart Instructors fundraising for an AED in his home town of Watchet.

Protecting the communities we serve is important in on many levels. The provision of this free CPR training is another way in which Devon & Somerset Fire & Rescue Service has been able to positively engage with the public, providing community safety services, and encouraging local resilience.

This training also contributes to the services Road Safety and Casualty Reduction. When a Road Traffic Collision occurs, very often the first person on the scene is another motorist, and not a blue light service. This invaluable training means that the more people are enabled to carry out CPR when it is most needed and help save lives.

Phil and Richard have also been working tirelessly fundraising to enable placement of AED’s in local communities and have subsequently provided follow up training in local Village Halls, Schools and Open Days.

Heartstart is an initiative co-ordinated by the BHF to teach members of the public what to do in a life-threatening emergency until professional help arrives. The skills taught include CPR and the use of an AED.

These skills are vital as each year 260,000 people in the UK suffer a heart attack (one every two minutes) and about 30% die before ever reaching hospital. Less than 10% of those who suffer an out of hospital cardiac arrest survive to see their next birthday. This is despite the fact that 65% of those cardiac arrests are witnessed by someone who could have performed CPR if they were trained to do so

Phil and Richard continue to deliver the free public CPR courses at Stn 61 on the last Wednesday evening of each month and aspire to place more lifesaving AED’s in local communities.

Anyone wishing to come forward for training as a volunteer Heartstart Instructor and engage with their local community should contact Firefighter Richard Flavin at Stn 61 or visit the website http://www.heartclass.co.uk/ for more information.