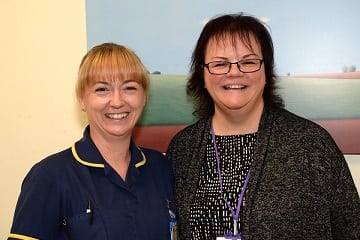 A specialist midwife at Musgrove Park Hospital has been named midwife of the year at a prestigious awards ceremony for the care and compassion she shows to families who have just lost their baby.

Keiley Tuck, bereavement midwife at Musgrove, was nominated for the accolade at this year’s Butterfly Awards by two women she had supported after the loss of their babies.

The awards were set up by Mel Scott, who spent three days at Musgrove’s Rowan Suite – part of the baby loss service – in 2009 after her son Finley was born stillborn.

They honour parents who have experienced the loss of a baby and celebrate some of the outstanding work done by people and organisations who provide invaluable support to them. Keiley picked up the title at the awards ceremony on Saturday 27 October in Warwick.

As bereavement midwife, Keiley visits families at their home shortly after they have suffered a bereavement to offer support and advice. She is also responsible for helping to run Musgrove’s Rowan Suite and provides mementoes
to families.

Keiley said: “I feel shocked and overwhelmed to have won the award, it is a real honour not just for me but for the whole of the team at Musgrove from my colleagues in midwifery to the chaplains, the team at the mortuary and the counsellors.”

“I’d like to say thank you to Becky and Luan who nominated me for this award, after the loss of their babies Jude, Billy and George, it was a really emotional evening.”

Angela Nicholson, one of the specialist nurses in the hospital’s early pregnancy assessment clinic (EPAC) at Musgrove, was also nominated for an award in the healthcare professional category. Although Angela didn’t win on the night, she said it was an honour to have been nominated and shortlisted for the award.

She said: “It was a really wonderful and very emotional evening and I felt very honoured to have been shortlisted. I was privileged to be in a room with so many like-minded people at the forefront of providing support or services for people who have experienced baby loss. “We were so thrilled when Keiley was named midwife of the year, she really does deserve it.”