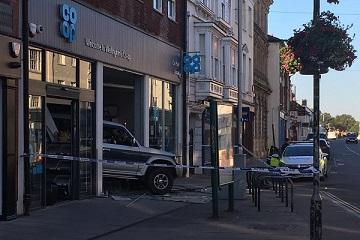 Avon & Somerset Police are investigating an attempted cash machine robbery in Wellington today after robbers tried to make off with it by using a 4×4.

The incident happened at 1am this morning at the Co-op in Fore Street, Wellington.

The vehicle pulled up to the store front and five offenders then got out and smashed the front windows before attempting to steal the cashpoint machine by attaching it to the vehicle. They failed and the vehicle was left embedded in the store window.

The offenders then ran off along South Street on foot.

A police helicopter was involved in a search of the area for the offenders but they were not located.

The scene has been cordoned off to allow for further enquiries today.

An Avon & Somerset Police spokesman commented: “If anyone has information which could help our investigation, please call 101 and give the call handler the reference number 5219151047.”